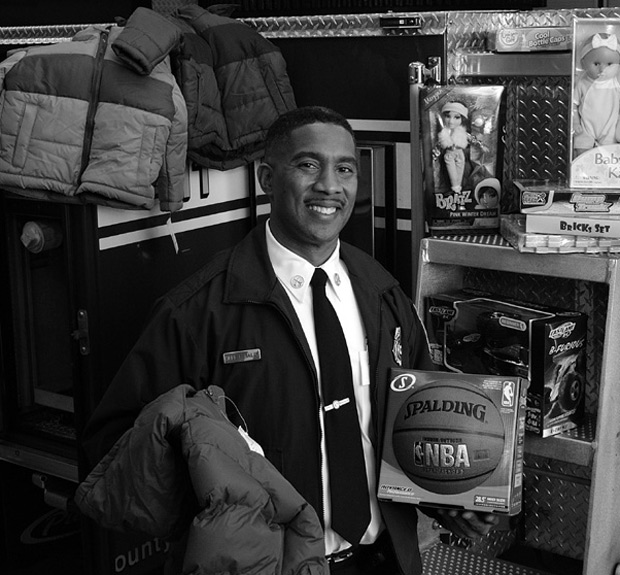 When you ask 2013 Legend Willie Bailey Sr. where he acquired his gift of giving back he will tell you it came from his father and mother, Willie and Gertrude Bailey.

Captain Willie F. Bailey, known by everyone as Will, is a professional firefighter who clearly is one who makes things happen. When he sees a child in need he springs into action, taps his vast network and marshals the resources to fill the need, not only for that child but for thousands of other children in Alexandria and throughout Northern Virginia. He says he has “been blessed with a gift to get folks to do anything when it comes to helping others.”

Bailey makes his living as the aide to the assistant chief of personnel services, Fairfax County Fire and Rescue Department. But he makes his life by what he gives in his off-duty time. His generous spirit and sense of urgency fill his personal life with ever-growing acts of kindness. “The kids don’t have time to wait,” he says.

The first group of kids who caught his attention didn’t have to say a word. About 16 years ago Bailey was called out on an emergency and found a houseful of kids. It was Christmastime but there were no holiday decorations in the house, no tree and no presents. His heart ached and he made it his mission to bring gifts to those kids for the holidays.

He approached churches and recreation centers and collected enough money to make the holidays bright for those children and that family. Since that time Bailey has never stopped. His drives to help disadvantaged kids have expanded into a year-round cycle of collections and giving.

Each August under the auspices of the nonprofit Firefighters and Friends to the Rescue, which Bailey founded and with the support of Fairfax County Fire & Rescue Department and Alexandria’s Fire Department he oversees the collection and distribution of approximately 3,000 backpacks filled with school supplies for children who otherwise would not have them.

During October he leads the collection and distribution of some 3,000 new coats for Operation Warm. “If a child doesn’t have a warm coat to wait at the bus stop, that child is not going to go to school. Also, there is a chance that child is on free or reduced lunch so they will miss two nutritional meals that day. And the fact that it’s a new warm coat helps build the child’s self-esteem.”

Each December he mobilizes his forces to collect funds from the community to purchase and distribute toys to needy children for the holidays. The basement level of Fire Station 11 looks like a satellite Santa’s workshop. Boxes of toys are stacked up, waiting for bright eyes and eager hands.

Bailey works with school counselors and social workers who identify the children who will be recipients of the bounty. His list of social workers and schools goes on for pages. He holds a big event in Fire Station 11 each December to which the children come to receive their gifts. Bailey is partial to buying remote-control cars for the boys and beauty-shop sets for the girls. He buys gift cards from Old Navy and other stores he knows the older kids consider “cool.”

Bailey’s leadership abilities and talents stem from the 21 years he served in the U.S. Army. He approaches each of his drives with tactical precision: identifying the target audience, mobilizing community resources and getting the mission accomplished.

Over the past two years Bailey has organized and produced his newest volunteer event, which he named Kids’ Cuts. Through his volunteer work coaching recreation league basketball and Little League Baseball, he noticed toward the end of the summer that some kids looked a bit “shaggy” and in need of haircuts before returning to school. One of his brothers is a barber, so he mobilized a corps of barbers, transformed a gym into a big barber shop and arranged to transport the kids for haircuts.

Spit-and-polish handsome in his uniform, Bailey is a fine role model. He hopes the kids will emulate him and come to learn that looking great on the outside leads to feeling great on the inside.

Bailey is a single parent who has put his two children through college. His son, whose passion is music, is a senior at the Art Institute of Washington. His daughter, a graduate of North Carolina State University, plans to return to school to earn credentials as a school counselor.

When congratulated on his nomination as 2013 Living Legend, Bailey was a bit mystified. He had never heard of the Living Legends, so he googled it. He remarked that he had “never wanted recognition” and thinks of himself as “the man behind the scenes.” Drawing on lessons from military service, he says his “job was always to make others look good.”

Over the past 13 years Bailey has been honored by many organizations. In 2002 the Mount Vernon Chamber of Commerce honored him as Firefighter of the Year.

In 2003 he earned the Positive African American Men Award from Christians in Action. In 2005 Alexandria City Schools presented him with the Business and School Partnership Award and Commerce Bank named him Hometown Hero. Firehouse Magazine recognized him with its Heroism and Community Service Award. The Alexandria Gazette gave him the “Who’s Who” award in 2006.

In the same year he earned the Fairfax County Volunteer Service Award and received the county fire department’s highest award, Career Firefighter of the Year. In 2007 he earned Fairfax County’s highest award for county employees, the A. Heath Onthank Award. In 2010 the National Association for the Advancement of Colored People of Northern Virginia honored him with its Community Service Award. In 2011 he earned Fairfax County’s Neighborhood and Community Services Award. And in 2012 the Rotary Club of Tysons Corner named him the 2012 Citizen of the Year.

When asked what motivates him, Bailey says, “I do it because it’s the right thing to do. I try to live by the motto: If you’re not part of the solution, you’re part of the problem.” His heart goes out to disadvantaged children who are “innocent victims of the system.” In them, he sees his own past.

Bailey was born in Richmond, VA in 1964. When his parents moved further north to look for work, he moved to his grandmother’s house in Scottsburg, a poor rural community in southern Virginia. He remembers the wood stove, lack of running water, single light bulb and snakes on the ceiling.

His only playmates were trees, chickens, possums and raccoons. He and his grandmother would take a Greyhound bus to Alexandria to visit his parents. He saw kids playing and having fun on the equipment and wanted to be one of them.

When it was time to return to Scottsburg, Bailey hid under the bed. When found he refused to come out. His grandmother left and shipped his things to Alexandria, where he has lived since he was five years old. When you ask him where he acquired his gift of giving back he will tell you it came from his father and mother, Willie and Gertrude Bailey.

Alexandria is fortunate to benefit from the dedication of Will Bailey, whose tireless efforts have improved the lives of countless children over the years.