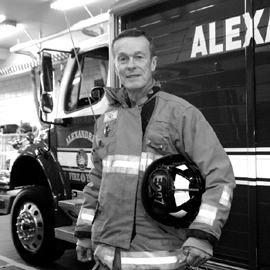 Bill Kehoe has done two things in his career and done them very well.

First he rose in the officer ranks in the U.S. Air Force with a specialty in personnel. After that, he became a volunteer, but a volunteer in fire fighting and house building. All in all, his life is a magnificent combination of service to the nation and the city.

Bill Kehoe is more than a Legend in Alexandria. He is a remarkable person and a true hero among us. Like many people who fit that description, he draws very little attention to himself and his significant accomplishments. Bill is all about service to his community and his country. Since retiring from the military he has served Alexandria in many ways.

He is a volunteer firefighter and volunteers at the Alexandria Fire Department (AFD) Emergency Operations Center (EOC). The Center coordinates the City’s processes of mitigation, preparedness, response, and recovery from man-made and natural disasters. It is used by City officials and related services and agencies to provide a coordinated response to major emergencies and disasters.

Whenever there is an emergency, Mr. Kehoe is there helping out. He was a first responder to the 9/11 crash and spent three days assisting in the EOC, shuttling AFD personnel to and from the Pentagon and standing a night shift fire watch on the Pentagon roof.

His latest stint in the Command Center occurred from the death of Emergency Medical Technician Joshua Wiseman through his funeral. The Center had been opened to coordinate the activities of the many fire companies that came to memorialize Mr. Wiseman, ensure coverage for the city by other local fire companies during the funeral and to keep residents apprised of traffic changes made necessary by the funeral.

Mr. Kehoe is not just a volunteer at the Alexandria Fire Department.

He went through all the training new firemen receive. He combined that training with his second Bachelor’s, a degree in fire science from the University of Maryland. He has used this training and experience to contribute to the wider community both here in Alexandria and nationally.

He is the Treasurer of the Institution of Fire Engineers whose purpose is to promote, encourage and improve the science and practice of fire engineering, fire prevention and fire extinction.

Another important contribution he makes is as the Secretary/Treasurer of the Friendship Veterans Fire Engine Association. This association has a long history of support for the Friendship Firehouse Museum. Taking the reins after the passing of Marshall J. Beverley, a former Alexandria Mayor and the driving force of the Association for many years, Bill has championed the cause of maintaining and promoting the history of firefighting. His vigilance ensures the highest possible quality of the exhibits at the museum. The Office of Historic Alexandria knows that it will receive a note from him when something is amiss in the firehouse.

Today, thanks to Bill’s quiet leadership, the Friendship Veterans Fire Engine Association assists in the preservation of the historic fire engine house on South Alfred Street in Alexandria. It supports the Alexandria Fire Department and provides scholarships and other benevolent and philanthropic services to the Alexandria community. The Association promotes civic involvement, honors the legacy of its 18th-century founders—dedicated citizen firefighters—and values the contributions of our present-day first responders.

His initial Bachelor’s degree in industrial and vocational education from the University of Illinois now stands him in good stead as a volunteer house builder and repairer. Kehoe volunteers regularly with Rebuilding Together Alexandria, an organization that donates home repairs to in-need families of Alexandria. Typically, he coordinates the activities of two or three volunteer crews who work on individual projects.

He began this aspect of his volunteer life at church where he and others volunteered their time to help others in the community. He went into the home finishing business when he and a team from Rebuilding Together Alexandria went down to New Orleans under Habitat for Humanity sponsorship after hurricane Katrina to repair the interior of 2 homes.

These elements are only examples of what Bill Kehoe does for Alexandria on an ongoing basis and for several decades. His contributions to the community are many. He has become recognized as a leader. He exemplifies what we mean when we say servant leader—one who quietly promotes those around him to be more effective and successful.

This award of Living Legend status honors his skill in teaching volunteers to be maximally effective.