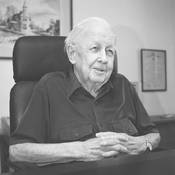 William B. Hurd is the ninth of 12 Living Legends for 2007 whose lives will be chronicled in the Alexandria Gazette Packet, this year. They are being chosen from the list of 49 people nominated by you. Living Legends of Alexandria will be an ongoing project that documents the lives of individuals who have made tangible contributions to the quality of life in Alexandria.

William B. Hurd’s most visible monument in the City of Alexandria is the DASH Transit System, which he helped design and found, and which he served as Chairman of the Board of Directors for 23 years. But his service to the City ranges far wider. He served on the Alexandria School Board for 5 years, and was its chairman during the period when the City’s elementary schools were integrated. He also served on the Planning Commission from 1981 to 2001, serving as chairman when he stepped down.

“Bill Hurd’s service to the City of Alexandria is legendary and without equal,” said former City Manager Vola Lawson. “In every area, he excelled in leadership and vision for the City. He is the quintessential New Englander, with a passionate commitment to public service.” Hurd himself, asked why he spent so much time in public service, said simply, “I enjoyed doing it.”

Shirley Tyler, longtime head of the Grace Episcopal School and active volunteer in the city, came onto the School Board during Hurd’s last year as Chairman. “He taught me practical things. He put me on the Facilities and Grounds Committee and taught me what to look for, how to look at facilities. Our roofs were forever leaking, so he said when we build new, we should look for a slope.”

HURD WAS A very good board chairman, Tyler said. “He encouraged staff to move toward modernization and professionalism, to keep up with changing times.”

Tyler and Hurd shared a New England heritage, which she believes motivates people toward giving back, toward public service. “Bill knew a lot about a lot of things, including transportation. He loved transportation.” But mostly, Tyler said,

T. Edward Braswell, who served on the Planning Commission for 29 years, 28 of them as chairman, said, “Hurd had more knowledge of the Alexandria zoning laws than anyone else on the Commission or outside. He just studied it. At that time zoning positions were exceedingly complicated, like medieval theology.” Braswell, now 86, stepped down from the Commission in 1993. “Hurd didn’t tolerate fools,” he said, “but he stayed out of the politics of it more than I did.”

Sandy Modell, General Manager of DASH, the City’s internal bus system, nominated Bill Hurd as a Living Legend. “He instilled this public service mentality in all of us who worked for him when we were young,” said Modell. Hurd was a mentor to many in the transit industry. “He touched their hearts,” Modell said. “To this day, there are transit managers and professionals who remember Mr. Hurd as the role model for how to operate the businesses, lead people, deal with political forces – in short how to be the best public servant you can be.”

When Hurd retired at 91 in October of 2006, Modell said, “He was probably the oldest living board chairman in our industry. His leadership spanned many different professions and people – the school board, the planning commission, his civic association.”

Hurd is 92 now. He’s moved from his longtime home on South Royal Street to an apartment in a retirement community. His quarters reflect the order and precision of his mind and work habits.

Born in Lynn, Massachusetts on August 27, 1915, Hurd earned a BA in Political Science from the University of New Hampshire in 1937 and served as an intern at the National Institute of Public Affairs in Washington, DC from 1937 to 1938. He did postgraduate work in Public Administration at The American University from 1938 to 1940 and again from 1946 to 1947, while working at the Department of the Interior. From 1942 to 1946 he served on active duty in the United States Army Corps of Engineers, rising from 1st Lieutenant to Major.

He served in the federal government for 35 years, moving on from Interior to the U.S. Housing and Home Finance Agency, and then in 1968 to the U.S. Department of Transportation, where he was Associate Administrator for Program Operations, Urban Mass Transportation Administration.

After his retirement from the federal government in 1972, he worked as a self-employed urban transportation consultant. He served as a consultant to the cities of Roanoke, Richmond, and Lynchburg when they set up transit systems. So when his old friend, Chuck Beatley, then serving as Mayor, asked him how one would go about setting up an internal transit system to better serve Alexandria, offering better connections to Metro Rail and more service to growing population areas of the city, he devised a plan based on his experience in those other places. It took about 2 years of planning, using his ideas and the services of a couple of hired consultants, to make the plan a reality.

“We set up a private, nonprofit public service corporation in accordance with Virginia law, not unlike the public utility company. We sold seven shares to the City for a dollar a share. City Council then elected a board of directors to run the system,” Hurd recalled recently. He said the system works well: It frees the City Council from the details of running the system on a day-to-day basis, yet the corporation is bound by the strict rules governing city operations and is responsible to the city. A management firm runs the system, and the general manager of DASH also serves as the principal transportation consultant to the City.

The dash transit system was incorporated on January 31, 1984, and began operations for revenue on March 11 that same year with 18 buses. Today the system has 62 buses running on 10 routes. It charges $1.00 as the basic ride fee and offers free transfers, and free rides for up to two children under 4 per adult rider. All buses are accessible to the disabled.

Hurd established a tradition of good and friendly service using as a model a small, private DC bus company whose service he admired, he said. “You know, polite, safe, careful bus drivers aren’t born that way. You train them, and part of the training has always been driver courtesy.”

Modell says Hurd’s leadership at DASH was based on more than his knowledge. It was also the respect he had garnered over his years of serving the City. “He was a leader in the eyes of City Council. What Mr. Hurd said carried so much weight.”