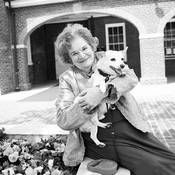 Vola Lawson is the fourth of 12 Living Legends for 2007 whose lives will be chronicled in the Alexandria Gazette Packet, this year. They are being chosen from the list of 49 people nominated by you. Living Legends of Alexandria will be an ongoing project that documents the lives of individuals who have made tangible contributions to the quality of life in Alexandria.

“We were driven by a belief that as part of a committed and compassionate government, we could make a difference,” Lawson said in a speech in 1993, when she was inducted into the Virginia Women’s Hall of Fame.

Lawson was born in Atlanta in 1934, and as a child lived with her paternal grandparents. Her grandfather was elected to the school board from the 4th Ward, which had all the historic black universities and the church where the late Martin Luther King Jr.’s father was pastor. In what was then by law a totally segregated world, she recalled recently, her grandfather would meet on the front porch with leaders from the colleges and with Daddy King, as the senior King was known. It was his son who later led the drive for desegregation in the United States.

“My grandfather was a passionate believer in fairness and racial equality. So I grew up in the heart of the deep south, but with grandparents who were extremely idealistic and incredibly fair-minded,” Lawson said. Those were qualities she took with her.

Lawson and her husband, David, moved to Alexandria in 1965, with sons David, 4, and Peter, 4 months, living at first in Parkfairfax. “We never meant to stay. But we fell in love with Alexandria and put down roots,” Lawson said.

They helped start the tenant’s association at Parkfairfax and worked to save a piece of land there as open space. She became active in charity work, got involved in the Urban League, and demonstrated for civil rights. Her husband ran the successful city council campaign of Ira Robinson, who served from 1970 to 1973 as the first Black city councilman since Reconstruction. The Youth for Robinson campaign was led by a young man named Macarthur Myers, whom Vola had met before, and he became a part of their family. Lawson considers him her son.

In 1971, Lawson began working for the City as assistant director for the Economic Opportunities Commission, where she was in charge of community outreach and grant applications. In 1975, she was appointed Director of Community Development Block Grants, channeling federal money for housing into Alexandria to help people buy or repair houses.

In 1981, Lawson was named assistant city manager for housing. When the City transferred the commercial and residential urban renewal projects from the Alexandria Redevelopment and Housing Authority (ARHA) to the City’s own jurisdiction, she was responsible for the construction and completion of almost $250 million worth of properties in the heart of today’s downtown Alexandria.

In February 1985, when then City Manager Douglas Harmon left his position, Mayor Charles Beatley appointed Lawson Acting City Manager. When Beatley left office that spring, according to current Vice Mayor Del Pepper, he said that leaving Vola as Acting City Manager was his gift to the City.

In September of 1985, after a nationwide search, the Council chose Lawson as the new manager. Pepper, who was first elected to City Council that same spring of 1985, and helped interview all the candidates, said they had interviewed four or five people that day and were tired, not looking forward to interviewing one more person. “She walked in and just electrified everybody…. On a scale of 1 to 10, she was an 11.”
Pepper, who nominated Lawson as a Living Legend, said, “What sets her apart is that she really extended herself.” Pepper said that Lawson was always very prepared. “Things went very smoothly. She was careful that Council was never embarrassed.

Former Mayor Kerry Donley said Lawson ushered in a new era of professionalism, hiring department heads and managers who had professional experience outside both the city and the region, people with expertise and new ideas. Lawson herself takes pride in having increased the professionalism and diversity of the city’s staff, hiring more women and minorities. She was also responsible for forming the Alexandria Commission for Women, which today oversees the Office on Women.

Lawson was a pretty tight manager, Donley said. “She always wanted to be informed and involved. She believed truly that the buck stopped at the Manager’s desk. There was true accountability.” Donley said he and Lawson communicated well, talking two to three times a day. “It made my job much easier and my time as mayor truly enjoyable.”

Former delegate Marian Van Landingham said Lawson’s long history of civic activism made her very effective because she had so many contacts in the city’s various interest groups and the city departments she had worked for and with. “She was smart, and tough, and understood all the Byzantine connections and conventions that made the city work. It takes a long time for an outsider to learn what she knew instinctively when she was hired,” said Van Landingham.

“Mrs. Lawson’s extraordinary touch of class and dignity, good manners and high standards in perfect service have created a lasting impact,” he said. “She is a stellar person who not only speaks about the Judeo-Christian doctrine of brotherhood, but practices it daily.”

Longtime friend Nancy LaValle Perkins met Lawson when both lived in Del Ray, and they often worked together over the years. “Vola has a great appetite for life. She managed the city like a mother manages her family: she cared; she was nosy. She was blessed with wonderful manners and always treated everyone the same way.”

Another longtime friend is Carlton A. Funn Sr., a native Alexandrian who taught in Alexandria schools for 38 years. “I volunteered at Hopkins House, which had kept me and my brothers out of trouble when we were young,” Funn said, and he sometimes met Lawson through his work there.

She now supports his work on an exhibit of cultural diversity that he created nearly 50 years ago to emphasize Black History, which was then not taught in schools. Of Lawson’s many contributions to Alexandria, Funn says he particularly respects that the City achieved a double Triple A bond rating when she was City Manager.

Beverly Steele, who served Lawson as Deputy City Manager, said, “The key thing about Vola is that she came from the community.” Along with honesty, integrity and fairness, that was the key to her success, Steele continued. She noted that Lawson was not only the City’s first female city manager, but also did much to promote the status of women by hiring them. Through her long service, she became a regional and national leader, raising the city’s profile nationally.

U.S. Rep. Jim Moran (D-8) said he considers Lawson his best friend. “She is so compassionate, so bright and full of wonderful intellectual curiosity, so well read, so good-hearted. She’s just a wonderful person,” he said.

Lawson continues to work on projects she cares deeply about. A breast cancer survivor who had a double mastectomy, she said that a mammogram saved her life because the kind of cancer she had did not manifest itself through lumps. After her recovery in 1994, she gathered representatives from Alexandria Hospital, the Office on Women and the Office on Aging as well as the Public Health Department. The group decided to raise funds to help provide education and funding for mammograms to lower income women, creating the Walk to Prevent Breast Cancer as the chief fundraising vehicle.

Lawson serves on the State Commission on Local Government. She also helped make a reality of the new animal shelter approved by the City late in her tenure by leading its fund-raising efforts. The new shelter, named after her, was dedicated in 2002.

Lawson and her Jack Russell terrier, “Jack,” recently returned to Parkfairfax, where her apartment has a view of the forested hill she and David worked to save back when they first lived in the community. “I love being back in Parkfairfax,” Lawson said. “It’s been the beginning and the end of our time in Alexandria. David’s buried in Ivy Hill Cemetery and I’ll be there next to him some day. Sometimes I wish it were all starting over again. Those were such wonderful days. We were young and all of our lives lay in front of us.”