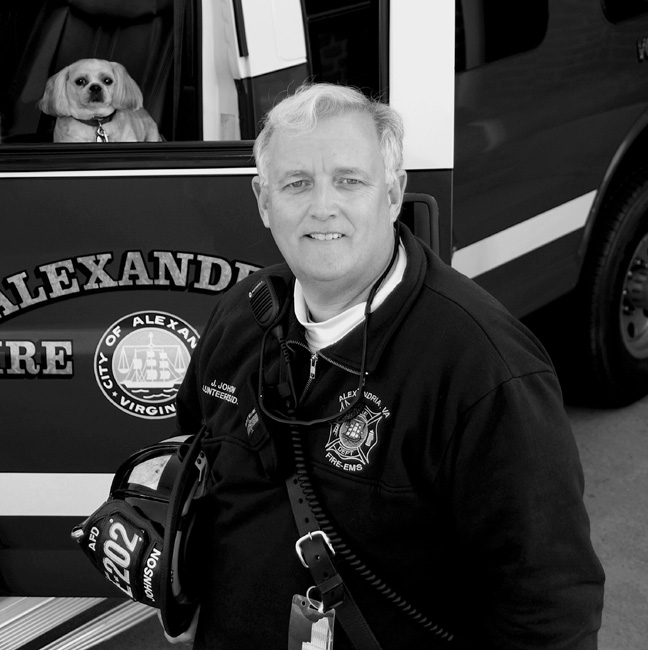 Thomas Young Johnson Jr., “Jay,” hails from a long line of proud volunteer firefighters.  His father and uncles were volunteer firefighters in Alexandria, where Jay was born, raised and educated. His early memories revolve around doing his homework in the fire station.  And now, thirty-five years later, he reflects on a distinguished history as President of the Volunteer Fire Department.

Beside his family, a major influence in his life was Mrs. Hazel Rigsby, a teacher at TC Williams High School “who liked him,” and who arranged a part-time job for him at the Department of the Navy.  He worked this job after school and in the summers and parlayed it into a life-long career.  He is now at the Pentagon as the Deputy Director in the Office of the Assistant Secretary of Defense for Reserve Affairs (Human Resources and Enterprise Support).

Jay has served on the Alexandria Traffic and Parking Board for twenty-two years and has been its Chairman for the past six years.  For a man who knows the streets of the City of Alexandria, particularly Del Ray, better than the back of his hand, this position is a perfect fit.

He is the voice of reason when residents request “traffic calming” measures for the streets on which they live.  He knows all the emergency routes and applies “inside” information to help the Board reach reasonable measures, thereby making Alexandria a better, safer place to live.

As Chairman of the Alexandria Traffic and Parking Board, he also oversees the regulation of the taxicab industry in Alexandria.  With his board, he handles complaints about drivers while appreciating that the board’s decisions affect the livelihood of more than seven hundred taxicab drivers.

Service to the public is Jay’s abiding mission.  When asked about his “proudest moment”, he answers, without hesitation, “Every call is my proudest moment.”  He detects a trend of the fire department providing more EMS (Emergency Medical Services).  With the aging of the population, his fire station volunteers are called upon to respond to heart attacks; administering CPR; providing transportation to hospitals.  On the other end of the spectrum, kids with breathing and medical issues are triggering more calls.  In addition, providing support to the police for car accidents, shootings, stabbings, HAZMAT situations is keeping his staff busier than ever.

A great source of pride at Station 202 on East Windsor Ave is Special Support 202.  This “ever-ready”, fully-equipped emergency vehicle puts the gleam in Jay’s eye.  He is responsible for its complete upkeep and maintenance, making it service-ready to provide medical rehabilitation and scene safety at any moment.  It contains a vast water supply to keep victims hydrated; powerful choppers to cut through branches felled by storms; clearing the way with its smaller wheel-base for other emergency vehicles to make their way onto the scene.  It goes on police calls to light up crime scenes as bright as day which greatly aids and supports the police efforts. It’s on-call for hostage situations and sobriety check points.

Operating emergency vehicles and providing life-saving services require constant, updated trainings and certifications.  As President of Alexandria Volunteer Fire Department, Jay Johnson is responsible for the administrative work that ensures that he and his staff are trained in the latest safety and rescue methods.  He oversees his volunteer firefighters’ complete  training in CPR, Emergency Vehicle Operations; physicals; risk management training.  Once trained, they need to be re-certified on a regular basis.  Thus, his active, on-call duty hours are filled with a mix of going on “run calls” and reviewing paperwork to see that his staff is qualified for their rigorous mission.

Helping people, in general, and the Volunteer Fire Department and Police Department in particular, brings Jay Johnson deep and long-lasting fulfillment. He has six notebooks filled with certificates, letters of commendation, and awards of recognition to show that his efforts are appreciated.  A sampling reveals that in 2011, he was named Alexandrian of the Year.  He served as Grand Marshall of the Turkey Trot in 2011.  He was recognized for his twenty-five years of tireless efforts as President of the Volunteer Fire Department.  He’s been recognized for his efforts with the Special Olympics.  He’s been a vital presence at scores of annual Waterfront Festivals, Art Fests, Halloween Parades, and Del Ray Community Nights.  And he’s earned a reputation as an outstanding hot-dog chef!

Rodger Digilio, who nominated Jay Johnson as a Living Legend, summarized this pivotal time period as follows:  “When volunteer fire companies were threatened with extinction, Jay labored for years with Alexandria’s administrators to professionalize the volunteers so they could be restored back to front-line service alongside Alexandria’s career firefighters, rescuers, police officers, and sheriff deputies.  He preserved a 200-year-old legacy of citizen activism in the best traditions of Thomas Jefferson resulting in thousands of hours of volunteer time contributed to our community each year.”

Even when Jay Johnson is not “officially” engaged in helping people, his decision-making and foresight have saved lives.  Before 9-11, he was scheduled to go on vacation and he learned that a wedge of offices was scheduled to be remodeled in the Pentagon.  He insisted that the date for re-locating his people to the other side of the building be moved up, so that he could complete the task before he went away on vacation, and not have to face it upon his return.

As it happened, because he was a planner and well-organized, his people were safely re-located in the other side of the building, rather than being in the wedge section that took a direct hit.  He acknowledges that, because of this sequence of activity, there were fewer casualties.