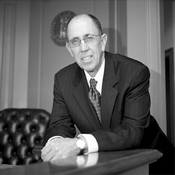 Steve Rideout is the third of 12 Living Legends for 2007 whose lives will be chronicled in the Alexandria Gazette Packet, this year. They are being chosen from the list of 49 people nominated by you. Living Legends of Alexandria will be an ongoing project that documents the lives of individuals who have made tangible contributions to the quality of life in Alexandria.

Steve Rideout became Chief Judge of the Alexandria Juvenile and Domestic Relations District Court in 1989. “I loved it from the day I walked in,” he recalled recently.

Rideout happened into law school almost by accident. When he finished Washington and Lee University in 1965, still unsure of what he wanted to do, he went on to W&L Law School, earning his LLB in 1968. He was an average student who did not find the law easy. Then came a clerkship with Judge George L. Hart Jr. in the U.S. District Court for the District of Columbia. “I got to go to court every day, and afterwards we’d dissect the cases and the performance of the lawyers, so it was a great learning experience for me in becoming a trial lawyer. And I knew right away I wanted to be a judge.”

As his career progressed, he took steps that would take him in that direction, though there were detours on the path. When the clerkship ended, he went into private practice in Alexandria. In his second case, he defended a Lorton prisoner who had killed another Lorton prisoner. When the man was convicted, Rideout felt he had failed, as he believed the man had acted in self-defense.

“I stopped practicing and went to work for the federal government.” After six months of being bored, however, he returned to private practice, working in the law building at 117 N. Fairfax Street in Alexandria. The building was filled with lawyers and Rideout saw this as another learning opportunity. “Every door was open. Whenever you needed help, the lawyers were open to talk, discuss strategy.”

Years later, he became a substitute magistrate and in 1983, a substitute judge in the General District Court and the Juvenile and Domestic Relations Court. “In the process, I learned how to be a better lawyer — what worked and what didn’t — and it also firmed up in my mind that being a judge was my career goal.”

In 1988, he was appointed Chief Judge of the Juvenile and Domestic Relations Court. The clerk of the court was Phyllis Brown, who by then had served for more than 30 years. “She is the most fabulous manager of people and systems that I’ve ever come across,” Rideout said, “and she trained me.”

The person who replaced Brown was Arlene Rager, whose talents approached those of her predecessor, Rideout said. “We were a great team.”

Rager remembers him as “the best boss I ever had.” He was a leader in foster care and child adoption and started the practice of Adoption Saturdays in Alexandria. Twice a year, she remembered, the adoptions of children who had come through the court system were formalized at a court proceeding followed by a big party.

AS CHIEF (and only) judge of the juvenile court, Rideout regularly worked 11-hour days, often skipping lunch. It was the era of the crack cocaine epidemic. The Northern Virginia Juvenile Detention Facility was overcrowded, shelter care was underutilized, and he saw masses of juveniles coming back repeatedly.

“It was clear to me we should stop what we were doing and look at how we could respond to their behavior to hold them accountable, to help them and their families and still keep our community safe — but not just keep locking these kids up,” Rideout said.

“We figured that if we could take 200 kids, who cost the system, back then, an average of $50,000 a year, out of state facilities, and take that $10 million in savings and give it to the communities for effective preventive programming, it would make a huge difference.”

In 1994, Judge Nolan Dawkins joined the Juvenile and Domestic Relations Court as a second judge. With a little more time, Rideout began asking people in the community for ideas on how to improve the system. He’d heard about the Model Court system, and in late 1995, they began to create a Model Court for Alexandria. Dawkins said Alexandria was perhaps the 13th Model Court in the United States — today there are some 32, and they have jurisdiction over about 50 percent of the children in foster care nationwide.

The building of Alexandria’s model court system was the beginning of Rideout’s second calling. Besides being a judge, he became a powerful advocate for children.

Dawkins described Rideout as “excellent to work with. We were always on the same page in how we approached a subject, even though we did not always agree.” Though Rideout retired in 2004, they still lunch together once a month. “Although he retired from the bench, Judge Rideout never retired from his commitment to the best interests of children here and around the country,” Dawkins said.

Lillian Brooks, director of court services for the Alexandria Juvenile and Domestic Relations Court, runs the juvenile probation department and the services that support the court. Court services has a staff of 35, including probation officers, mental health therapists and people who run programs at the Day Reporting Center, where children can be ordered to report after school if they have no structure at home or need tutoring. The Center offers educational programs to young people, and parenting programs for those whose children are on probation.

Brooks said when Rideout came on the bench, there were very few programs for youths in the court system. “We worked very closely together to craft new programs that addressed the problem of truancy among at-risk children. A lot of the improvements would not have happened without his grass roots involvement and advocacy,” Brooks said. “His persistence got people to stop turf fighting and finger pointing and work together.”

Rideout and Dawkins also instituted a family treatment drug court in 2001. Dawkins said it was the first in the state and “remains perhaps the largest one.” This court provides family treatment to parents whose children have been removed from them and placed in foster care.

Debra Collins, director of Human Services for the City of Alexandria, met Judge Rideout when she worked for the Model Court in Buffalo. “He has a broad national reputation,” she said. She notes his role in reducing the time of children in the dependency courts, making sure they have permanency as soon as possible.

Vicki Youcha, executive director of the Center for Alexandria’s Children, said she first knew Rideout through the National Council of Juvenile and Family Court Judges. She was working for the organization Zero To Three, trying to improve outcomes for maltreated infants and toddlers. “Steve listens. He’s really great at bringing together people and getting them to work together differently to reach a solution. You can’t divert him from the goal … and he’s not afraid to have a big vision, to see things differently than they are now.”

Diane Charles, executive director of Stop Child Abuse Now (SCAN) of Northern Virginia, said, “Judge Rideout has been probably the strongest advocate for children, on and off the bench, in the City of Alexandria.” SCAN runs the Court Appointed Special Advocate (CASA) program. CASA only succeeds, Charles said, “if the local juvenile judge supports and uses it.” Rideout, she said, “always wanted more information so he could make the best decision for the children.”

Rideout, now retired from being a judge, still travels the country advocating, teaching and training courts and personnel in other communities to adopt best practices in juvenile and domestic relations courts. Here in Alexandria, he helped found, and remains volunteer co-chair of, the Coalition for Alexandria’s Youngest Children, which focuses on assisting children age 0–5. His co-chair there is Deborah Warren, director of Child, Family and Prevention Services at the Alexandria Community Services Board. Rideout, she says, is utterly passionate about the coalition’s work.

“The reason I left the bench,” Rideout said, “was that I felt as though I was called to take what I learned from this community and all the judges across the country and convey it to the rest of the country. I’m seeing just miraculous change in how communities can improve their systems to achieve better results for children and families. That’s what I hope to keep doing.”

Rideout is married to Bobbie M. Rideout. They have two children and three grandchildren.