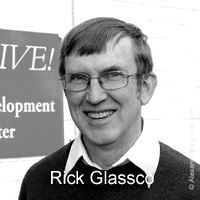 The two volunteer positions not­for­profits find hardest to fill are those of recording secretary and treasurer so it is not surprising that once ALIVE! (Alexandrians InVolved Ecumenically!) tapped Richard Glassco for the position of treasurer, he has remained in the position for 23 years. During that time ALIVE!, which was founded in 1969, has grown from an all­volunteer organization to one with volunteers from about 40 faith communities, a 1.3 million dollar budget and about 14 employees.

It is a complex operation and he has broken the budget into three components. The child development center at First Christian Church is a preschool program for low income parents who pay on a sliding scale fee. The ALIVE! Shelter for homeless women and children provides housing for longer periods than at a regular shelter. The Family Assistance division provides monetary assistance for medicine, rent and utility payments as well as emergency food deliveries and the last Saturday of the month program which distributes food from three sites. In addition, the organization collects furniture and housewares for people in need. Glassco is proud of the fact that they keep administrative costs low. As part of his work as treasurer he writes all the checks, makes quarterly reports in all three areas and comes up with an annual budget, “a big deal,” he said. His wife Sarah noted that he gives these reports in a way people can understand and added that the amount of work involved has grown tremendously.

Glassco grew up volunteering. His father was a Presbyterian minister in Ohio and from childhood he was involved in church and in scouting, becoming an Eagle Scout. After he graduated from college he moved to Alexandria, where his parents had already moved, and joined Immanuel Church­on­the­Hill, where he has been a member for 34 years. Immanuel was one of the original founding churches for ALIVE! and he was recruited by activist Danie Bradford to join ALIVE! as church representative. He later became vice president and president before taking on the role of treasurer.

He has been just as active at Immanuel as a vestry member in charge of worship, a choir member for 30 years, a Sunday School teacher and a frequent worker at Immanuel’s famous yearly pumpkin patch. His membership in choir was a natural choice; he has been singing all his life and learning a variety of musical instruments. He started with piano and took up clarinet, tenor sax, the Celtic harp, recorders and dabbled with the bagpipe. He and his wife Sarah met at a Scottish Country Dancing group in Alexandria and said “we enjoy making music together.”

His love of mathematics from childhood led to his career with computers, his involvement with ALIVE! as treasurer, and to mentoring. His employer, Noblis, supports the Higher Achievement program, so Glassco volunteered to work as a math mentor with students every Monday night at Hammond Middle School. He tutors two to four students at a time.

While Glassco believes his faith inspires his volunteering, he also believes in getting involved in local politics which he feels is very consistent with the service aspect. “I believe the party I support is much better for poor people,” he said, leading to his involvement in voter registration drives and canvassing for the recent gubernatorial race and the past two presidential races.