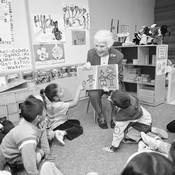 Patricia S. Ticer is the second of 12 Living Legends for 2007 whose lives will be chronicled in the Alexandria Gazette Packet, this year. They are being chosen from the list of 49 people nominated by you. Living Legends of Alexandria will be an ongoing project that documents the lives of individuals who have made tangible contributions to the quality of life in Alexandria.

State Sen. Patricia S. Ticer (D-30) came to politics naturally, she said. “I majored in government in college, so I always had the interest,” said the Sweet Briar College graduate. “And when I married Jack Ticer in 1956, he was in his first term on City Council. My parents had worked on his election campaign.”

Patsy and Jack went on to have four children — three daughters and a son. Patsy was active in PTA, a warden at St. Paul’s Episcopal Church, an Alexandria Hospital Board member and president of its junior auxiliary affiliate, the TWIG. “I had done every sort of volunteer work in the City, and had worked in real estate for 12 years,” she recalled when asked how she first came to run for office. Her youngest child, Virginia, had started school, and her husband suggested she try politics. Then one day she ran into Mayor Chuck Beatley on the street, and he asked her to run for City Council.

“It was a large field of candidates, and we went from forum to forum,” Ticer recalled. “Chuck had some of us practice our speeches at Lois’ Walker’s house and at home in front of a mirror.”

The practice must have worked — that and the name recognition she enjoyed in the city from her years of volunteerism. She came in second in a field of 12 candidates. That was 1982, and she kept being reelected, rising to the position of vice mayor in 1984. She was serving as vice mayor in January 1991 when then-Mayor Jim Moran left for his new job on Capitol Hill, having been elected to Congress in November 1990. In May of 1991 she was elected mayor for a full three-year term. She was the first (and to date, only) woman elected as mayor of the city.

During the first year, she said, she felt people watched her a little more critically because she was the first woman. “My style was different from that of a lot of the men. Often, I didn’t make up my mind until I heard the discussion, rather than organizing and steering a vote ahead of time,” she said. Some of her male colleagues felt this was not a sign of strength, she said. But she still feels the same way. “If you, as an elected official, have an agenda, it’s punitive to the other side, which deserves to be heard before Council.”

After about the first year, however, her position as a woman became accepted. More women in the city had reached higher positions. “We had a kind of matriarchy going there, for a while,” Ticer recalled of the period when she and Councilwoman Del Pepper, City Manager Vola Lawson, and Delegate Marian Van Landingham — among others — served at the same time.

Patricia Keyser Smith was born in Washington, D.C. on Jan. 6, 1935 and moved to Alexandria with her parents in 1947, when she was in seventh grade. She graduated from George Washington High School.

Ticer served one full term as mayor, and was halfway through another when she was asked to run for the Virginia legislature. “I loved being mayor,” Ticer said, “but we needed more Democrats in the Virginia Senate, so I ran.” She won the 30th District seat and went to Richmond in 1995.

In the Virginia Senate, where seniority has a lot of weight, “I was back to square one,” she said. There were eight women in the Senate at the time. That group of women bonded, she said, but, “It was a very difficult time in partisan terms.” George Allen was governor, and it was difficult to get funding for projects dear to Ticer’s heart.

Former Alexandria Vice Mayor Mel Bergheim nominated Ticer as a Living Legend for her “extraordinary public and community service” and remarkable achievements. “When you look at her legislative commitments and accomplishments you will see they are closely tied to where her heart is: she is committed to the health, education and well-being of children and their families. It really comes from the heart,” Bergheim said.

Ticer looks back with satisfaction at her early work on City Council, where she strongly encouraged the first rigorous review of the City’s master plan and zoning code since 1952. She worked with Mayor Beatley in his efforts to transform Alexandria from a sleepy bedroom community to a thriving independent economy by encouraging “clean business” such as associations to move into the city. “That was really the beginning of our outreach to businesses and eventually the high-tech community,” said Ticer.

She also led the City’s successful fight against the plan of then Redskins owner Jack Kent Cooke to build a new stadium at Potomac Yard on land the city had zoned for mixed-use residential and commercial development.

In Alexandria, on Council and then as mayor, Ticer worked to put Alexandria in the forefront on progressive childcare and early childhood education issues, providing the political enthusiasm and support to set standards and build programs. Both in the city and later in the Legislature, Ticer consistently worked for improved standards and regulations. During the administration of Gov. Gerald L. Baliles (1986–90), she was appointed to the Virginia Governor’s Council on Child Day Care and Early Childhood Programs. She toured facilities where daycare providers clearly did not have adequate training or education to offer safe, quality care. Too many people in power in Richmond still regarded childcare as babysitting, she recalled, and did not believe in regulating it. She worked for grant funding so that providers could take courses — a program eliminated by funding cuts in the mid to late 1990s. “Educating childcare providers is key,” she said.

Barbara Fox Mason, Executive Director of the Child and Family Network Center, which today runs 12 preschool classrooms — nine in Alexandria and three in Arlington — remembers when Ticer, as mayor, visited the first Alexandria Network Preschool. Ticer soon appointed Mason as her representative on the City’s Economic Opportunities Commission and later the Early Childhood Commission. Ticer now serves on the Center’s Advisory Board.

Ticer had been involved earlier as well. The first Network Preschool had been started when a group of women talking at a neighborhood party decided to form a task force. They had learned that every single child who went to kindergarten from the Cameron Valley Housing Project on Duke Street (long since razed) failed. They simply were not prepared to learn. Today, Mason said, according to a recent survey reported in McCall’s magazine, Alexandria has the highest number of accredited child care facilities of any locality in the country.

“Patsy understands what the issues were and are, both here in Alexandria and now at the state level,” said Preschool Director Sharon Shackelford of the Child and Family Network Centers. “It has been critical for us in the field to have someone who is knowledgeable about the issues to articulate the importance of what we do to the society at large.” Shackelford said Ticer’s ongoing support is critical in fundraising. The Child and Family Network Center has a budget of about $2.5 million dollars, most of it privately raised, Mason said. In the past decade local, state and federal funding has declined, and what remains is more difficult to access. Many of the children served by the Center are American citizens, but their parents are not, and most funding for services depends on the eligibility/citizenship of the parents.

Torpedo Factory artist Murney Keleher said she appreciates Ticer’s support for the arts in general and the Torpedo Factory Art Center specifically, particularly during the buy-back of the Factory while Keleher was president of the Artists Association and Ticer was Mayor. Keleher described Ticer as “very centered and caring. She is a lady at all times, kind to all people, very courtly.” Keleher is Ticer’s longtime tennis partner. They met when they were both members of TWIG, back in the late sixties or early seventies, she said.

Judy Drewry, longtime board member of Senior Services of Alexandria, says that organization has also benefited from Ticer’s caring support over the years. “Her serenity is incredible,” said Drewry. “Her mind is going like crazy, but she stays calm. I find that so impressive.”

In the Virginia Senate, Ticer serves on the Rehabilitation and Social Services Committee, the Agriculture, Conservation and Natural Resources Committee, and the Local Government Committee.

In private life, Ticer and husband Jack enjoy their six grandchildren. She sometimes babysits — when she has time. “Someday, if I ever hang up my campaign shoes, I’d like to volunteer to read to children in the schools,” she said.