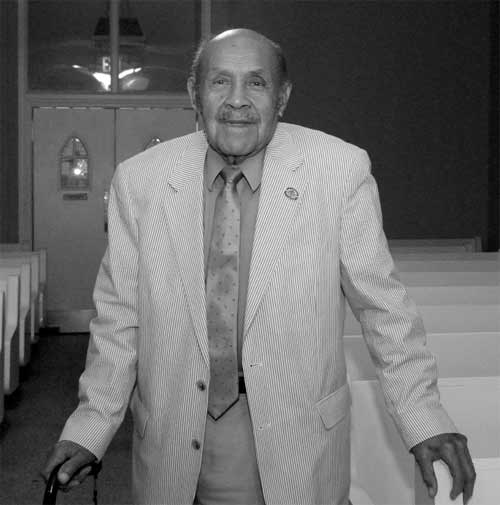 Senior Services of Alexandria describes 95 year-old Nelson Greene, Sr. as an “agent of change.” Greene was the second black since Reconstruction to serve on Alexandria’s City Council.

Born in Danville, Va., Greene migrated to Alexandria in 1953 to open a mortuary. “It’s a hard job to analyze how things turned out,” Greene said. “I was lucky.”

“Luck has to do with getting in positions to make change,” Greene smiled.

In 1953 Alexandria was a segregated, southern city dominated by Dixie-crats. “Not everything Harry Byrd did was wrong, I just can’t remember what he did right,” Greene said spryly. “It’s the way he did it. I did the right thing getting Council to help.”

In 1953 Alexandria blacks were the subject of racial discrimination. Virginia’s eugenics law remained, schools were segregated, and a poll tax was required to vote.

Alexandria’s schools did not desegregate until 1959, after Byrd’s Southern Manifesto failed. Senator Harry F. Byrd, Sr. (D-VA) favored massive resistance as a counter to the US Supreme Court’s 1954 Brown decision.

“I can’t even begin to describe massive resistance,” Greene said quietly. “It was awful.”

“With Jim Crow, blacks lived a secondhand life,” Greene continued. “You knew you couldn’t do this or weren’t allowed certain places. Whites seemed to be living better than we were and they didn’t accept blacks as citizens of the United States. It was hard for whites to reposition after slavery and look on us as citizens, not slave people.”

“In the 1950s – for political reasons – a group of us started the ‘Secret Seven,’ to make things better for black people,” Greene explained. “I don’t like politics but I wanted to make the community better.”

“Segregation was very prevalent in Alexandria; we were told where we could live,” Lionel Hope confirmed. “In the late-50s and 60s, when the city wanted to do anything in the black community they initially went to the Secret Seven. Once Nelson and I went on City Council the Group sort of splintered.”

“Nelson is a quiet sort of person, very deep in thought and just the kind of person to tell us where Alexandria should be,” said Ferdinand Day, also a member of the Secret Seven. “Nelson has been a solid citizen from his entrance into the city and he has worked especially hard for the underclass.”

“Nelson mentored all of us,” Day continued, “in a quiet and direct manner. He is quiet, like Teddy Roosevelt was quiet. When others around him were upset, he kept his mind clear and the goals set. We relied on Nelson to keep us on target.”

I was appointed to the Alexandria School Board in 1964 ten years after Brown,” Day concluded. “The Secret Seven was responsible for my entry and I walked on Nelson’s shoulders to get there.”

“Nelson mentored me,” Hope agreed. “I hold him in high esteem. Seldom do you find someone so down to earth who also has a good sense of leadership.”

“If I could crow,” Greene said hesitantly, “I fought for job opportunity. I was about integration, yes civil rights, and no blacks worked at City Hall except for janitors. I talked with stores and businesses, starting with the bus company and most ended up hiring blacks.”

“Nelson Greene had a very successful presence throughout the community,” said 1970 NAACP President F.J. Pepper. “He was a positive point person for black stakeholders.” The Seven secretly endorsed political candidates.

“Nelson was one of the people back in the day who paved the way for us to have a smoother existence,” added past NAACP President Howard Woodson. “He took care of the major issues and we now have to insure the gains are maintained and all aspects of discrimination wiped away.”

“Many people are brainier,” Greene explained. “I just wanted a better life for me and my family.”

Greene still lives with wife Gloria above Greene Funeral Home at 814 Franklin Street. Together they have two sons.

Greene’s life lesson: “Whatever you see that you want to do, if it’s the right thing for you to do, then use good common sense and make the effort to do it. Don’t let others stop you! I wanted what the white boys had.”

As a City Council member, Greene opposed the 1979 repair of the Washington Street Confederate Soldier’s statue.

“I opposed it because of what it represented,” Greene said. “We need to get the whole Confederate background off the mind of people and take up today’s problems, try to forget slavery and concentrate on a better situation for blacks.”