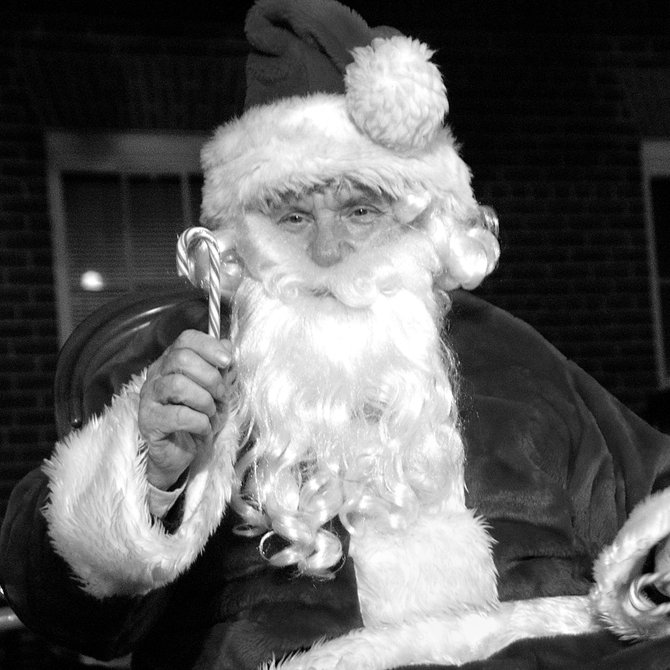 One does not often get to sit down in a chair next to Santa Claus; the usual seat is in his lap. But Mike Oliver, who is Santa’s number one helper in Alexandria, took time during a respite after the busy Christmas rush to be interviewed about the numerous activities that led to his selection as an Alexandria Living Legend.

A transplanted West Virginian, Mike Oliver was born in Parkersburg, the second son (behind Art, Jr.) of Art and Lura Oliver. His father was secretary/manager of an American Automobile Association (AAA) affiliate which in addition to the usual AAA duties also fulfilled many functions normally handled by a state’s Department of Motor Vehicles. His mother was his father’s bookkeeper.

Mike’s father had a second, secret identity. He was Santa Claus’s local alter ego appearing at many events, especially those for the Community Chest (now United Way). Clearly, Mike comes by his Santa’s helper role naturally and for years he wore the Santa suit he inherited from his father until he received a generous donation which enabled Mike to replace the deteriorating family heirloom. The sleigh bells he uses to announce Santa’s arrival are the same bells his father used.

Mike received his BA degree from West Virginia University (WVU) in 1961. (Several years ago, he was named WVU’s Outstanding Alumni for Community Service.) While at WVU in Morgantown, he met Mary Linda Burks, who received her BS degree in 1961 as well. They married on Dec. 27, 1961 and have just celebrated their 50th wedding anniversary. Together Linda and Mike raised two daughters, T.C. Williams graduates Kathleen, who now lives in Ashburn, and Sarah, who is married to fellow teacher Brian Maceyak. They live in Manassas. Sarah is the mother of Mike and Linda’s 6-year-old grandson, Will. After raising the girls, Linda who Mike freely admits is “considered by all who know us as the Brains of the Oliver Outfit,” worked for the Alexandria City Public Schools as a cafeteria manager and retired after 24 years. (For many of those years she was the cafeteria manager at T.C. Williams High School.)

Mike enlisted in the U.S. Army Reserves in 1959, eventually attaining the rank of Sergeant 1st Class (E7) before retiring in 1973. He had the distinction of serving in the 80th Division, his father’s old World War I unit. The newlyweds moved to Richmond and Mike went to work for VEPCO, continuing with them until 1965.

That same year, Mike, Linda, and baby Kathleen, moved to an apartment in Fairlington. Shortly afterwards, Mike began working at the U.S. Department of Health, Education and Welfare (which became the U.S. Office of Education in 1980). He retired in 2000 as student financial specialist. They bought their first Alexandria home in 1967 and Sarah joined the family two years later.

The next year, Mike’s mentor, Bob Miller, recruited Mike into the George Mason PTA. PTA became a theme in Mike’s life as George Washington (PTA president three times) was followed by Minnie Howard (PTA president twice) and T.C. Williams. He served as Alexandria PTA Council president (1984-85) where he was supported by an excellent board of parents and teachers. In nominating Mike for the Living Legend recognition, Harlene Clayton described Mike as “a life-long cheerleader at T.C. Williams football and basketball games.” He and Linda are “Grandpa and Grandma Titan” at these events to this day.

Mike established close ties with his daughters’ schools and their activities. He coached Alexandria Soccer Association (ASA) teams throughout the 1970s and served as ASA area vice president for three years. Given his background in the Office of Education, it is not surprising that early on Mike became involved with The Scholarship Fund of Alexandria. He currently is an applications reader and sometimes scholarship presenter (1990s -2011). This connection to his youngsters’ schools expanded to include serving as parent representative to the Youth Services Commission (1980s -1990s) and parent representative to Project Discovery (1980s-1990s).

In 1979, Mike began volunteering at Alexandrians Involved Ecumenically (ALIVE!) as the representative of his church, St. Clement Episcopal. He pitched in everywhere: delivering furniture and participating in the Turkey Trot collection of food donations. He served as the ALIVE! board president (1993 -1994). Throughout this 30-plus years of involvement with ALIVE!, Mike served as Santa’s helper for the children of the ALIVE! Child Development Center. He fulfills other Santa duties throughout the community for various organizations and schools, including 25 years as the City’s Market Square Santa as well as for Del Ray and North Ridge tree lightings. For all these appearances, Mike accepts no payment but instead requests any donations go to the ALIVE! Child Development Center.

He and Linda have been active members of St. Clement Episcopal Church for over 40 years. Mike has been a Sunday School teacher and Vestry member serving as Junior and Senior Warden. During this time, he participated in various other church activities such as selling Christmas trees and helping with the church’s winter Overnight Hypothermia Shelter for men. Pam St. Clair who also nominated Mike for Living Legend recognition tells about a time when she needed someone to fill in at the Overnight Hypothermia Shelter. She called Mike who readily agreed to fill in at the last minute. It was only later that she discovered it was Mike’s birthday and he put his plans on hold to be there for the shelter clients.

He has served many years on the North Ridge Citizens Association board of directors, working on fall festivals, selling Christmas trees, and helping with just about everything else happening in the neighborhood. He was a frequent Red Cross whole blood (and more recently platelet) donor, with over 35 gallons donated in his lifetime.

Mike does find occasional time for himself and enjoys blue grass, folk, and Celtic music. He and Linda take full advantage of the Kennedy Center’s Millennium Stage presentations and attend many free concerts by the service bands. They also enjoy lectures at the National Archives, the Library of Congress and the Lyceum. Mike just finished reading “The White War: Life and Death on the Italian Front 1915 – 1918,” the story of Italy’s tragic experiences in World War I.

Given all that Mike has accomplished in Alexandria, it is not surprising that he was named the Alexandria Times’ Citizen of the Year in 2007.

Whether dressed in his red suit with an excited youngster on his lap or in his regular clothes, Mike Oliver has truly become an Alexandria Living Legend.