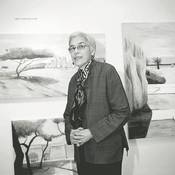 Marian Van Landingham founded the Torpedo Factory Art Center, which opened on the waterfront in 1974. She also represented the 45th District in the Virginia House of Delegates for 24 years, from 1982 to 2006. During all that time she was also a working artist with a studio in the Torpedo Factory.

Born in Albany, Georgia on September 10, 1937, Van Landingham earned bachelor’s and master’s degrees in political science from Emory University. After working in public relations jobs in Atlanta, she came to work in Washington, first at the National Air Pollution Agency, and then as a speechwriter for the late Rep. Phillip M. Landrum (D-GA). She found an apartment in Shirlington, where she lived from 1967 to 1971, and joined the Art League when it was housed in Parkington (now Ballston). When it moved to 315 Cameron Street in Alexandria in 1971, she followed along, finding a “totally unreconstructed” apartment on the third floor of a building at the corner of Cameron and North Pitt Streets. Its great advantage was that it was just a block from the Art League, she said. Meanwhile, having found writing speeches rather boring, she cut back her job to part-time and began freelancing in public relations work in Alexandria. “I didn’t have to go into Washington any more. It was a kind of breaking free.”

By 1973, she had become president of the Art League, and the League had outgrown its space on Cameron Street. “I was getting discouraged,” she recalled. Even the worst spaces were too expensive. One of her part-time jobs was in Alexandria’s Bicentennial office. (The Alexandria Bicentennial of 1974 celebrated the 1774 Fairfax Resolves, an early statement predating the Declaration of Independence and principally composed by George Mason back when Alexandria was a part of Fairfax County.) The head of the Alexandria Bicentennial Commission was Jim Coldsmith, then editor of the Alexandria Journal. In her 1999 book, On Target, Stories of the Torpedo Factory Art Center’s First 25 Years, Van Landingham recalled his suggestion: “Why not consider the Torpedo Plant,” he asked. “The City doesn’t know what to do with it.”

So began her effort to turn the former torpedo factory, built in the early 1900s to produce torpedoes for use in World War I, into the art center that has become a worldwide model. When she first looked at the factory, it was filled with old government office furniture, Smithsonian Institution storage items, federal documents from World War II, including the records of the Nuremburg Trials, and layers of encrusted pigeon dung. The three blocks of buildings were considered a blight on the waterfront, and because they were so different from the 18th and 19thcentury buildings that predominated in the area, many citizens wanted them knocked down.

Van Landingham had a different idea: She drew up plans that would make space not just for the Art League’s galleries and classrooms, but also for artists’ studios. There was evidence that people are curious about how artists work, and she thought open studios would attract visitors to watch painters, sculptors, printmakers, potters, jewelers, stained glass workers and makers of musical instruments. She pitched the art center as a modest, 3-year experiment, and with support from the Bicentennial Commission, the City, under then-Mayor Chuck Beatley, eventually authorized original funding of $140,000 to clean up one of the old buildings and make it usable. The government began moving its stored materials out of the building, and in the spring of 1974, the artists began cleaning and painting.

The Torpedo Factory Art Center (TFAC) celebrated its official opening on September 15, 1974, and soon became a major tourist attraction and the heart of new projects to redevelop the waterfront and the historic part of the city. As the first director, Van Landingham was front and center in the effort, leading not just with ideas and organizationally, but physically with the labor. “About every three days (during the original cleanup), I went to Duron Paint and bought about 15 gallons of antique white. Everything was dirty government green with rat footprints,” she recalled. “We had three 16-foot extension poles with rollers to do the upper walls of spaces with 20-foot ceilings,” she remembers. The artists still hold an annual painting party to spruce up the interior.

Margaret Mayer, the Factory’s first assistant director remembers when it had no air conditioning, and the offices she and Marian shared had leaky roofs. “I remember Marian getting up on the roof with a bucket of tar to fix the leaks – and ruining her white sneakers,” said Mayer.

The artists acquired some of the stored furniture that the government didn’t want to bother moving. Among the finds were 12 mahogany table legs, wrapped in paper covered with pigeon dung, which Van Landingham traded to the City carpenter in exchange for labor. Today they are the legs of the massive official table in the Council Work Room at City Hall.

The way the factory operates has evolved over the years, but the basic principles remain the same. The artists must work a certain number of hours per week in the studios, which cannot simply be little galleries with paid sales staff. Prior to 9/11 the factory drew about 750,000 visitors a year. Since then, the numbers are down a bit, but the TFAC remains the city’s single biggest tourist attraction.

The artists from the early days of the Torpedo Factory remember how much fun it was. Mayer recalled free artists’ parties, so crowded they had to limit access and only let more people in when others left. John and Luray Schaffner, now retired to Southern Maryland, had a studio there from the start, often bringing along their two children. Son Shawn helped man the first information desk when he was only about 10.  Sculptor Larry Morris has fond memories of a “very Bohemian art community that provided a nurturing atmosphere for my career, allowing me to thrive as a working artist.”

Jolande Goldberg, another sculptor, said, “Marian was open to anything that was esthetic and made artistic sense. She has a very fine eye, and this applies to her political work too. She is a very calm presenter – not that she lacks passion, but she can contain it. That’s really key to her success.”

Mary Ann Stevens, one of the original artists at the TFAC, said that having a real studio made a huge difference to artists who had previously worked part-time at home. “Without her, I would never have had an art career, I don’t think,” said Stevens. “Marian has always been able to use both sides of her brain successfully,” added Stevens. “She’s both an artist and a successful politician.”

Andra Patterson, a painter, was president of the TFAC Artists Association from 2003 to 2005, during the time the Factory suffered hurricane flood damage. “She was my mentor, always available. In a long meeting of 100 or so artists, she would listen to everything, and then in two sentences, cut to the heart of the matter.”

Artist Marsha Staiger has known Van Landingham for 10 years, and says, “She motivates everyone who comes in contact with her to think outside their own sphere.”

In 1975, Van Landingham encouraged Phyllis Cohen and another printmaker from the Art League to set up a printmaker’s group. The Printmakers opened on the third floor of the Factory in June of that year, with Van Landingham as a member. Cohen and others are still there, though Van Landingham moved on to other media and is today a painter of large oils. “I have always felt that that day in her office changed my life. It allowed us to do what we wanted in our lives – our art – in addition to our families,” said Cohen. “It gave us a sense of community, interchange between artists on a daily basis, and it broke the isolation of working at home alone.”

“Because it is a concrete reality, so visible in the City, the Torpedo Factory is what people will remember me for—more so, probably, than for the 24 years of legislative service,” Van Landingham said. She’s proud of her work on the Appropriations Committee, particularly the Public Education subcommittee, which she chaired near the end of her service, and of her efforts to increase funding for the aging, mental health, Medicaid, childcare, help for the homeless. “There was never enough money to go around,” she said, but she successfully advocated for human services funding for projects in Alexandria and elsewhere. She also served on the Privileges and Elections Committee and the Militia, Police and Public Safety Committee.

The early campaigns were tough. She had little money, and needed to gain name recognition. She ran first in 1981 and lost, then ran again and won in1982. Lois Walker, who managed Van Landingham’s early campaigns, remembers it as exhausting work. “Marian is one of the most stubborn, tenacious people I’ve ever met, really a determined person, said Walker. “She would get up and walk 100 houses a day when campaigning, knocking on doors, talking to people, leaving notes for those not home. She’s tall, and she walked fast. I always felt as though I was running to keep up.” One of the things that helped Van Landingham succeed in the House of Delegates, Walker believes, is that “She talks Georgian. She is truly southern, and could talk to all those southern gentlemen in the legislature.”

Longtime aide Harlene Clayton, said, “Marian truly legislated from the heart. She cared deeply for those less fortunate and who needed a spokesperson on their behalf…. She was also a true advocate of equal justice for all of the citizens of the Commonwealth.” Clayton said Van Landingham always maintained an open door to Alexandria constituents. “And on the campaign trail, when the going got tough, Marian was a real trooper.”

Many of Van Landingham’s friends and colleagues mentioned her persistence and toughness, her humor and her wit. Printmaker and painter Nancy Reinke, who has known her from the factory’s beginnings, commented on her well-known love of puns. But above all, she said, Marian is an artist. Others, she said, “may speak of her power and prestige as a brilliant legislator and policy maker.” But inside the Torpedo Factory, Reinke said, “She is one of us: a talented, prolific painter and a valued friend.”