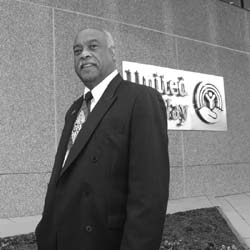 Living Legend Lynnwood Campbell says no to many requests. He won’t be a flunky or token on your board. But when there is a genuine need, he happily says yes. As a result, he has impacted our public schools and policies toward children, human rights, the city budget, charitable giving, and elections.

Lynnwood was born in Freedmen’s Hospital (now Howard University Hospital) in 1947, though his family lived in Alexandria. His father was a deliveryman who became the first black salesman at Virginia Electric Supply on King Street and his mother owns and operates her own beauty shop. Today, his younger brother, Bernard works at the Alexandria Amtrak Station. His sister Wilma Anderson, who died a few years ago, worked in the law offices of Samuel and Otto Tucker as a teenager and retired from Federal service. Lynnwood has a baby brother in Silver Spring, Zachary Moore, a retired IBM Engineer, who was adopted by the Campbells at three months when his mother died.

After completing St. Joseph’s Elementary School, Lynnwood enter 8th grade at St. Mary’s Elementary School where he was the first black student. The first week, police monitored the situation and Lynnwood’s father drove him to school. It felt like he was Sputnik with students coming up just to look at him.

“Then (the late) Ken Barnett came up and asked if I’d like to be friends. He was a really popular student and once we were friends, things settled down.”

For High School, as a minority Lynnwood would have to appear before the Alexandria School Board (to which he was later appointed) and ask for permission to attend George Washington or Hammond rather than Parker Gray. He chose not to demean himself and instead accepted Virginia’s offer of one-half tuition to attend a school elsewhere (part of Virginia’s strategy of Massive Resistance to integration). Each day, he took a bus into D.C. where he attended Western High School. It had an interesting serendipity when he met his future wife Deborah on the bus. She attended arch-rival Wilson High School and after Western won a basketball game between the two schools and a fight appeared imminent, she told him to stay by her and they’d be safe. Today, they have a daughter Robin who lives near Philadelphia.

Lynnwood graduated from Western in 1965 and enrolled at Howard University where he graduated with a degree in accounting and business administration. He was working at Price Waterhouse when he was called to active duty. He completed the U.S. Army Finance School and was assigned to the Military District of Washington as the Deputy Finance and Accounting Officer. His brother Bernard was innocently caught up in a situation at Gino’s Restaurant. The youths actually involved left but when Bernard fought with a policeman, he was arrested. Word spread and there were several small incidents that threatened to lead to a riot which the Army was prepared to assist. Lynnwood went to his commanding officer and said he did not want the Army to go into Alexandria. He was told to get over to Alexandria and do something about it or the Army would come in. Lynnwood met with the city manager and got his brother out of jail (the charges eventually were dismissed) and generally calmed things down. The Army had no need to enter Alexandria.

He completed his Army obligations at the rank of Captain. and returned to Price Waterhouse after active duty where he became a Certified Public Accountant. Eventually, he went to work at the Treasury Department’s Federal Home Loan Bank (now the Office of Thrift Supervision). Today, Lynnwood is the Director of Internal Review and Quality Control. Alongside his Federal career, Lynnwood has built an impressive record of volunteer service to Alexandria and the region. He was a board member of the Northern Virginia Urban League and the Washington Urban League. He worked primarily on accounting and education issues and was a member of the Alexandria NAACP Board of Directors. He helped establish the Alexandria Urban League and was on the board of directors of the National Conference of Christians and Jews.

City Council appointed him to the Human Rights Commission in the early 1980s and in March 2007, he was appointed to the Alexandria Election Process Review Committee. Appointed to the school board in 1982, Lynnwood served until 1991, including a year as vice chair, helping to create the Early Childhood Development program, all-day kindergarten, the C-Average rule requiring better grades for high school athletes, the Junior ROTC program at T.C. Williams High School, and the Minority Achievement Committee. He unsuccessfully ran for City Council twice – as an Independent because of the Hatch Act.

Lynnwood was a board member and former chairman of the board of Alexandria Neighborhood Health Services Inc. This grew out of his political associations. One of the doctors, a candidate for the school board, asked him to join the board because there were no blacks on the board. Lynnwood said no twice because he did not want to be the board’s token member. He eventually joined to help them with their accounting.

After the United Way scandal, Vola Lawson asked Lynnwood to apply for a reconstituted board. A former boss warned that it was a pointless process as the board had already been selected. Lynnwood interviewed anyway and explained that he would not be a flunky; he was only interested in real work. United Way had just that. He was asked to join the board and eventually served two years as chair. He is proud of helping turn around the agency which last year received a Washington Business Journal award for having one of the best financial reporting systems for an area not-for-profit.

Lynnwood gave away his boat a few years ago as he didn’t have enough time to enjoy it. Amongst all his volunteer activities, he does have some spare time which he uses for watching sports, especially NFL football. He tends to tune in more toward the end of the seasons, like during March Madness or in October for baseball.

Of his contributions Living Legend Lynnwood Campbell says simply, “People asked me to serve, and I served.”