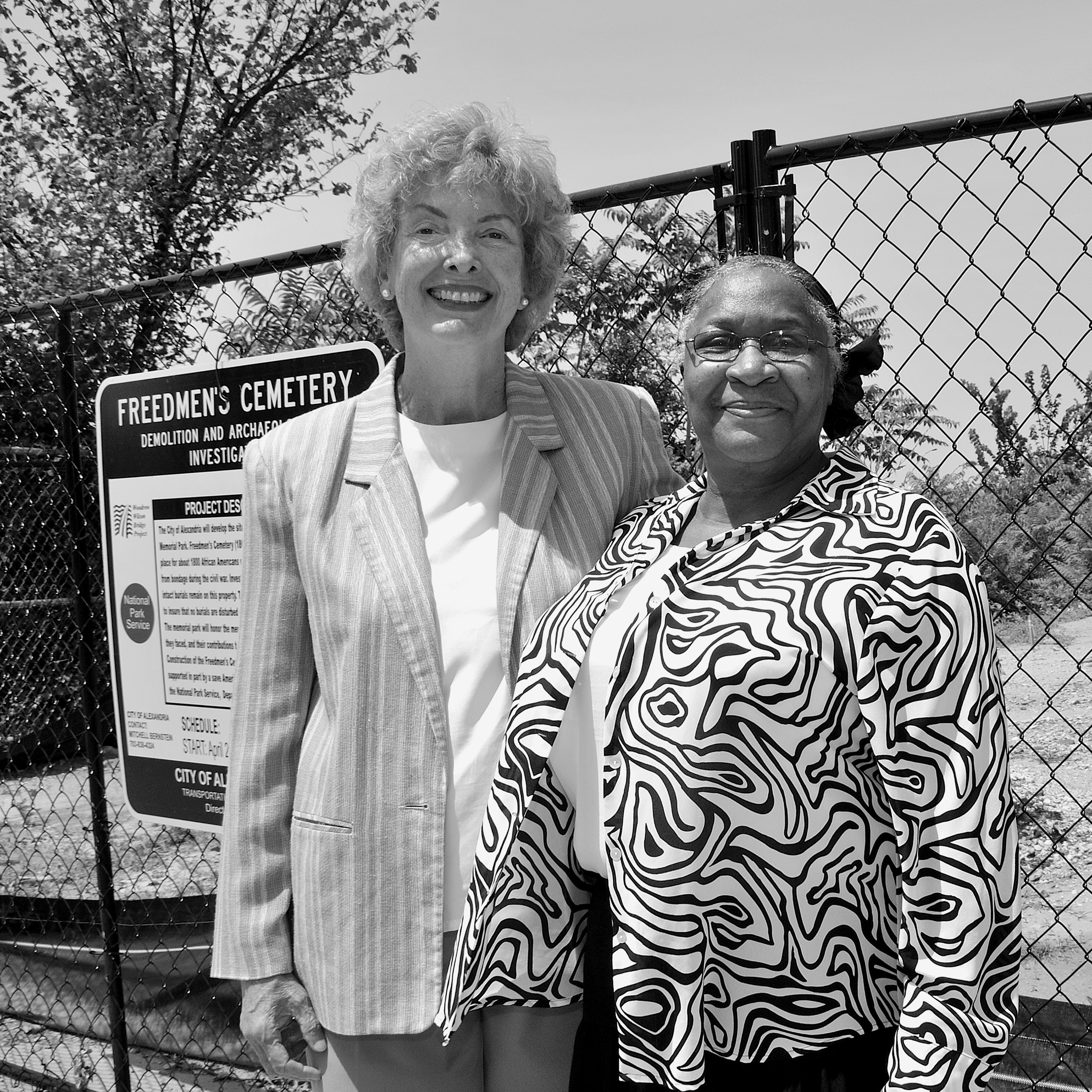 Lillie Finklea and Louise Massoud were both born in Washington, D.C., within a year of each other, before the Civil Rights Movement and before the Wilson Bridge connected Virginia with Maryland, but while a small parcel of land in Alexandria was still marked as an African-American cemetery.

Lillie moved to Alexandria as a child and Louise moved to Arlington. The area boomed following the Second World War. Roads became busier, and the Eisenhower Interstate system created a grid across the country and a loop around the nation’s capital. A new bridge spanning the Potomac was planned, and entrepreneurs explored building motels and service stations to accommodate the influx of residents and visitors.

The crossroads in Alexandria where the George Washington Memorial Parkway met Washington Street would now reach across the Beltway. After a proposal to build a hotel there was thwarted, the small parcel of land became the site of a Flying A gas station.

More than forty years after the Wilson Bridge was finished, plans called for expansion. Without question it would greatly affect the south side of historic Old Town Alexandria. Neighbors were concerned about noise, pollution, traffic, and impact on natural and historic resources. Lillie and Louise, both now living on the south side, shared those concerns. Then in January 1997, they read a Washington Post article about the tragic history of the small parcel of land where the gas station and a later office building were standing.

The site had been Freedmen’s Cemetery, a burial ground established by the military during the Civil War occupation of Alexandria. Housing, diet and sanitation during the war were poor, and thousands of African Americans flocking to Alexandria to seek freedom were faced with deteriorating conditions. Hundreds of them died, and in 1864, the U.S. Army established a cemetery for them on the southern edge of town, directly across from St. Mary’s Catholic Cemetery.

Over the next four years, more than 1,800 freedmen, or contrabands as they were often termed by military officials, were buried there. The superintendent documented the names, ages and when available, other details in a written record. In 1868, burials ceased and the federal government abandoned the cemetery. Confederate loyalists in Alexandria tried to put the defeat of the war behind them but memorialized the sacrifices of their brothers in grey. African American residents, many who had been born in slavery, made their homes, found work, built churches and schools, and struggled to find family members who had been sold away.

The wooden markers that had memorialized the dead at Freedmen’s Cemetery decomposed. A brick company hauled away clay soil and compromised the graves. In the early 20thcentury, the George Washington Memorial Parkway was built over part of the graveyard. The Beltway construction destroyed the southern edge of the cemetery. And although a 1939 tax map clearly identified the “Negro Cemetery,” that did not keep a gas station from shattering countless more graves. With time, the memory of the cemetery faded until it was indeed forgotten.

Alexandria historian Michael Miller had re-discovered the existence of the site, and Virginia historian Wesley Pippenger recovered the cemetery superintendent’s burial records and transcribed the names. Lillie and Louise wondered, how could this cemetery have been so violated while St. Mary’s remained so well-maintained?

Lillie appealed to the African-American churches in Alexandria but received a limited response. She contacted City staff who were supportive but couldn’t do much since the gas station and office building were now private property. She pleaded with City officials who were facing many problems posed by the bridge, and she continued to tell the story of Freedmen’s Cemetery to anyone who would listen.

In 1997, as plans for the new Wilson Bridge emerged, Lillie and Louise not only wanted to ensure that it would not further impact what remained of the cemetery, they wanted to see the site memorialized as the sacred ground it had once been. They both had grown up with an appreciation for their ancestors and as children, remembered visiting the cemeteries where their family members rested. On Memorial Day, they left flowers on the graves of their ancestors, so Louise suggested that they do the same thing at Freedmen’s Cemetery.

In May of 1997, they hosted a special tribute on Memorial Day at the cemetery, a wreath-laying event that helped publicly identify the site as a cemetery. Two members of the Alexandria City Council joined them, and a proclamation was issued declaring the last week of May a “Week of Remembrance of the Freedmen’s Cemetery.” Interest from other Alexandria officials grew, and Lillie and Louise expanded their efforts. They had nothing to lose and never hesitated to ask for support.

They formed the Friends of Freedmen’s Cemetery, and each Memorial Day, they returned to the cemetery to place flowers at the site. More City Council members joined them, and soon some churches and civic associations made donations to the group. The local branch of the NAACP showed interest. The media started to take notice and public awareness increased through their news coverage.

Lillie, Louise and the rest of the Friends secured a grant from the Virginia Foundation for the Humanities to build a website and to produce a pamphlet. They put up a small sign, illustrated with a hopeful rainbow, on the chain link fence between the Beltway and the gas station. They raised money for a Virginia historical highway marker and continued to hold annual memorial tributes with an official proclamation for a week of remembrance.

The City of Alexandria had filed suit to stop the proposed Wilson Bridge expansion and when they settled, it was only after assurance that historic resources would be protected. Lillie and Louise wondered if that would include Freedmen’s Cemetery. Archaeological investigations determined that graves still remained and many were likely intact. Federal funds could be used to protect the site, but how much could be done with a gas station on top of so much of the cemetery?

Bridge construction began and Lillie, Louise and their neighbors saw the steady parade of dump trucks and heard the deafening pile driving. Both women worked closely with City archaeologists and with staff at the Alexandria Black History Museum, which opened an exhibition about the cemetery. Stories in the Alexandria Gazette, the Washington Post and the Washington Times captured the hearts of people in Alexandria and beyond.

The City determined that mitigation funds could be used to save Freedmen’s Cemetery. In 2007, the City purchased the office building and the gas station and tore down both structures. In June, the site was officially rededicated as a cemetery and City archaeologists worked the rest of the year to document remaining grave shafts, discovering nearly 500. Lillie and Louise were appointed to serve on a steering committee to select a winning design from a public competition that yielded dozens of entries from across the country. This fall, the City of Alexandria announced the winning concept for the Alexandria Contrabands and Freedmen’s Cemetery Memorial.

Lillie and Louise set out to protect, preserve and restore the cemetery, and their mission is nearly complete. For being the voice of approximately 1,800 once-forgotten African Americans, many who experienced only months or weeks of freedom before their deaths, Lillie Finklea and Louise Massoud are indeed Living Legends.