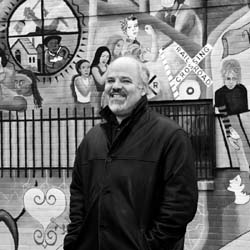 Jon Liss is a democrat with a small d. Liss, Executive Director of Virginia New Majority, actively promotes democracy. A community organizer, he fights passionately for social equality. Jon champions people of color and labors to change “the old ways.”

“I’m shameless; an urban expert,” Liss said. “I work consistently for what I know is right. Sure there’s hostility out there, but a new day is coming!” Jon repeatedly references “the old ways.”

Born in Brooklyn, New York in 1958 Liss is of “eastern European Jewish” heritage. When his father, an architect, relocated to Falls Church, Virginia the family followed. Jon “grew up Jewish in what was then the South.”

Liss graduated from Falls Church’s Marshall High School—”the wrong team in Remember the Titans”—and the University of Virginia. A history major, he became intrigued with Virginia’s past. “The old ways” are synonymous with the old Confederacy.

Described as a strong community advocate, Jon empowers the poor. Liss is committed to affordable housing, human rights, and fair employment practices. He is credited with the city’s 1990 hiring of ten bilingual police officers.

“When I graduated from college I knew I did not want a corporate job,” Liss explained. “My history degree prepared me to be a taxi driver so I went to work for the Falls Church Yellow Cab Company. It wasn’t long until I was organizing, fighting for drivers’ rights.”

“We were union affiliated, the Communications Workers of America, and to make a long story short I was fired.” Liss continued. “Law suits ensued and it took a while for things to settle.” Jon later organized Alexandria’s driver-owned Union Cab Cooperative.

Liss’ achievements are many. The Ford Foundation in 2003 gave Jon, and four colleagues, its Leadership for a Changing World Award. The Award, including a $100,000 prize, assisted in “fighting what they call ‘Jim Crow II’—meaning discrimination against low-income people, especially immigrants.”

“Many people, including African-Americans and new immigrants, are still living with the legacy of slavery,” the Award application said, “and they are still learning their rights.” Liss speaks “of a wave of anti-immigration ordinances,” especially in Prince William County.

“People of color are from the global south, African-American, or born in Africa,” Liss explained. “They have a right to city space.” According to the 2010 Census Alexandria is 16.1% Hispanic, 21.8% black or African-American. “Race is a social construct,” Liss said. “We are a salad bowl not a melting pot. Most segregation problems, issues in the city, are about white people leaving or self-segregating.”

Liss, until December 31, 2010, served as Executive Director of Tenants & Workers United. Jon was a co-founder. Established in 1986, TWU is the largest member-based, low-income community organization in Northern Virginia. Its mission “is…to develop multi-racial leadership for social and economic justice, and to democratically control or own community resources including housing, education and health care.” In 1990 TWU’s budget was $3,000. Today its operating budget is $1.1 million.

Tenants & Worker’s United was born in response to a Washington Post article detailing mass evictions in Alexandria’s Arlandria section near Four-Mile Run. Many of the residents “were Salvadoran, victims of gentrification.” In 1996 Liss and the TWU solved the problem, in part, by establishing a resident-owned housing cooperative known as Chirilagua. TWU’s constituency is primarily Hispanics.

“I spoke my smattering of Spanish, the residents responded, and together we prevented the mass evictions of low income tenants,” Liss smiled.

Jon believes housing, like city space, is a right. Low income housing, however, need not be scattered-site. Liss again reminisces about his life in an “immigrant Jewish enclave.”

Among Liss’ other accomplishments: passage of Virginia’s first Living Wage legislation (Alexandria and Arlington), education reform including the creation of a bilingual immersion program, and formation of the nationally-organized Right to the City Alliance.

What is Liss’ life lesson? “I am the father of two and I want to teach my children that we can make the world a better place. I believe on some fundamental level people have a tremendous capacity for good. Income implies riches, but real wealth is adequate housing, healthcare, work that brings sustenance and a better life for our children.”

“A New Majority is not outside the realm of possibility,” Liss said. “So what if some politicians drive us like a corkscrew. We’re advocating for a different kind of Virginia.”

From Virginia New Majority’s website: “Founded in August 2007, VNM breaks from Virginia’s old history of racism and corporate domination. We build on the best democratic traditions…we work to create a new and modern political system…We build power by organizing the diverse peoples of the Commonwealth.” Jon argues “people first,” allies with “progressives” and favors “the progressive tax.”

The connection between ethnicity, race and class is difficult for Liss to detail. A recent Washington Post-Kaiser Family Foundation-Harvard University poll confirms Hispanics and blacks are “far less likely to own homes.” Foreclosures are not uncommon and Hispanics median income is 73% that of whites.

Can a Hispanic be elected to Alexandria’s City Council? “There could be a Hispanic on School Board maybe as early as the next election,” Liss replied. “City Council could be within the next ten years, but it would have to be a coalitional deal.”

Jon Liss is a street soldier who in his own words is “creative and collective; realistic, but ambitious.”