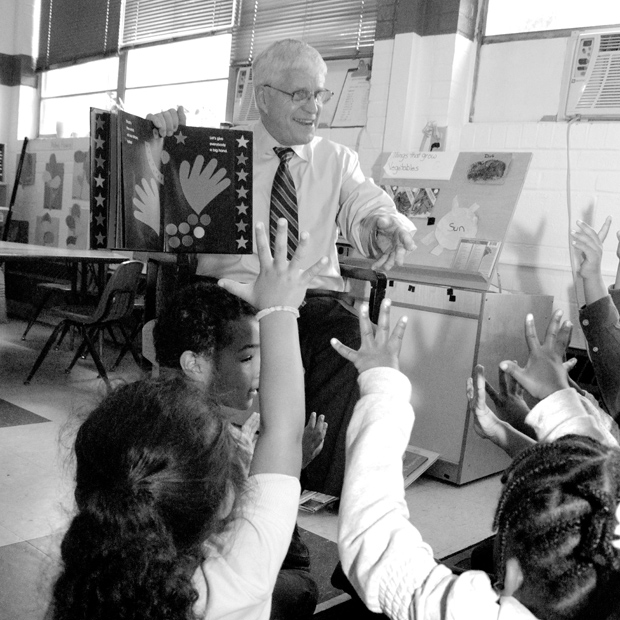 For two decades, that has been the chant of countless children at ALIVE! who, literally, hang on every word that Harry “Bud” Hart reads to them.

“They run up to him and hang on his legs so he cannot move more than a couple of inches with each step,” said Mike Oliver, who also volunteers for ALIVE! and nominated Hart to be a 2012 Living Legend of Alexandria.

ALIVE! (Alexandrians Involved Ecumenically) is a non-profit organization of volunteers from more than 40 local religious congregations and the community working to help those in need in Alexandria.

“I really enjoy being around kids. That’s more fun than anything else I can do,” says Hart, an attorney and the founding partner in the Alexandria law firm Hart, Calley, Gibbs, & Karp, P.C., which specializes in zoning and land use law. “Reading is important. I’m having a lot of fun. I don’t know what I would do if they told me I couldn’t do it anymore,” Hart says.

“He’s a guy who could be making billable hours” says Oliver. “He’s a well-connected lawyer who’s in demand.” Instead, he sets aside time every week to read to children. “Is it the reading? No. It’s the attention he pays to the kids every Thursday,” Oliver says. “He’s very dependable. He’s reliable. It’s the act of making those kids special. It is a visit by an outsider who is saying, ‘You are pretty important to us.’”

Ken Naser, the executive director of ALIVE! says, “You can set your clock by him arriving every Thursday afternoon. The kids squeal with delight,” he says. Hart also is the pro-bono lawyer for ALIVE and one of its major fundraisers.

In 1982, the Childhood Development Center of ALIVE! needed repairs to an old school bus they used to transport low-income children to its programs. ALIVE! held a walkathon to raise funds. Now in its 31st year, Hart’s walking is sponsored by the Alexandria Kiwanis and he has raised thousands of dollars. The walkathon begins at ALIVE!’s Childhood Development Center at 2723 King Street. Participants walk down to Market Square in Old Town and back. This year’s walkathon is scheduled for May 6.

Hart was born in Chicago, raised in Milwaukee and moved to the City of Alexandria, where he served in the City Attorney’s office from 1964-1968. While in that office, he was appointed to the board of the Northern Virginia Juvenile Detention Center, where he served for about 25 years including nearly a decade as chairman.

During that time he spearheaded the building of a new, state-of-the-art facility. Naser and Hart both graduated from Loras College in Dubuque, Iowa. “In terms of how to live a life, he is one of our proudest alums. He’s got very big shoes. There’s no slowing him down,” Naser says.

Hopkins House in Alexandria also benefits from Bud Hart’s commitment to community where he reads to children on Wednesday afternoons. Hopkins House is a non-profit organization that has facilities in Old Town Alexandria and the Route One Corridor in Fairfax County that provide educational programs to children, youth and their families regardless of income, to help them achieve their full intellectual, economic and social potential. Glenn Hopkins, president of Hopkins House has known Hart for more than two decades.

Hart has been a trustee of Hopkins House since 1984 and was chairman of the board from 1999 to 2008, a time when Hopkins House developed a strategic plan to re-focus its efforts and resources and built a new facility on the Route One Corridor. Hart is especially concerned about reaching out to at-risk youth and keeping them in programs that can help them succeed. “What we’re doing with kids, we need to do more,” Hart says.

Hart is an extraordinary person, humanitarian and father, Glenn Hopkins says, and has attracted other prominent business leaders to the board of Hopkins House through his example. “He blesses the community with his involvement and it’s not something he announces,” Hopkins says. “That’s the magic he shares with all of us. If there are angels among us, he’s one of them.”

Clearly, reading to children is just one small part of what makes Hart worthy of being named a 2012 Living Legend of Alexandria but Hart is humble about his contributions.

As a land-use lawyer, Hart says he has gotten particular satisfaction from the “bricks and mortar” projects that he was able to help bring to fruition, including the new Juvenile Detention Center, the new Hopkins House building and a new facility for Blessed Sacrament Catholic Church of which he is an active member. “When you chop wood, it’s important to see the pile—to know that you made a difference,” Hart says.

In addition to ALIVE! and Hopkins House, Hart also has been actively involved with the Community Services Board and the Alexandria Kiwanis Club. Hart also credits Blessed Sacrament Catholic Church and his involvement with the Christian Family Movement for his passion to give back to the community. The watchwords to “observe, judge and act” are ones he applies to his volunteer activities.

Despite his success in the worlds of law and philanthropy, Hart clearly holds his family first and foremost. “The most important accomplishment of my life was getting Connie to marry me,” Hart says, referring to his wife of 49 years. He met Connie while a student at Georgetown Law School and they married in 1963. He is the very proud father of five “terrific” children: Anne Marie, Michael, Joe, Elizabeth and Mary Catherine, and 12 grandchildren. Elizabeth is the manager of his law office in Old Town and Mary Catherine is a partner in the law firm.

Hart says to benefit from a good work, “Don’t tell anybody and don’t get caught!” He says that humility is not thinking little of yourself, it is thinking of yourself little, and he credits Connie with being better at that than anybody he knows. She is very “other-centered,” Hart says. “It’s important to do something that will live longer than you do,” he says. “It’s important to absolutely insist on enjoying life and that requires centering on other people.”

Hart says he recommends that people not take credit for God’s generosity and he says that to have a perfect day, “Do something for someone who cannot repay you.”

“This is all a gift. If you’ve got a gift, spread it around,” he says.