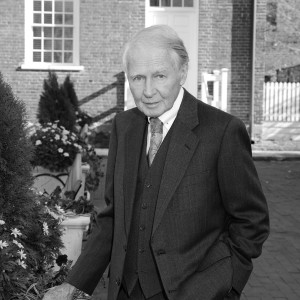 For Alexandria Living Legend Stewart Dunn, it is a matter of balance. He balances his professional duties as a partner at Ivins, Phillips & Barker with his duties as Vice Chair of the Planning Commission. He must have the balance right as in 2010, Stew was named Washington DC Tax Lawyer of the Year. In addition, the George Wythe Society of Citizen Lawyers (the oldest organization at William & Mary Law School) recently invited him to give the first lecture in 2010 of their annual Citizen Lawyer Series. They brought him to talk to students and faculty as an attorney who exemplifies the citizen lawyer ideal via his civic engagement and commitment to the ethical practice of law.

He and his first wife lived in Washington and Arlington before settling in Potomac, Maryland. After his first wife died in 1975, Stew was left to raise his three sons who ranged in age from junior high to college freshman. In 1978, Stew married Loti Kennedy Savage. They lived in Potomac while remodeling their historic house in Alexandria to accommodate five children. Today, Stew’s son, Chris, is a lawyer in New York City and his son, Tim, who has retired after a successful career in managing investment funds, lives in Middleburg, Va. Son, Anthony, died in an automobile accident in 1980. Of Loti’s children, Eliza lives in Alexandria and Rhett in Portland, Oregon. Stew and Loti enjoy being grandparents to their six grandchildren.

After settling in Alexandria at the beginning of 1980, Stew became an active member of the Old Town Civic Association and served as treasurer. A request to host a fundraiser for Hopkins House at their home led to an invitation to serve on its Board. Stew served for 10 years.

He was appointed to the Alexandria Human Rights Commission in 1983 where he served a full term and, in the late 1980s, he was selected to serve on a commission to revise the existing zoning code. Council adopted the revisions in 1992. Stew served on the Board of Zoning Appeals (ending as Vice Chair) and he has been on the Planning Commission since 1995, where he currently serves as Vice Chair.

On the Planning Commission, Stew has represented the Planning Commission on the Washington Street Standards Task Force, the King Street Retail Advisory Committee, and the current Waterfront planning process. He also serves as the chair of the Infill Task Force. In nominating Stew for the Living Legends recognition, John Komoroske, Chair of the Planning Commission, described him as having assisted that body in every meeting with his uncanny attention to both microscopic detail and the global goals of our planning process, treating applicants, the public, staff and fellow commissioners with the tactfulness of a senior diplomat, but with an iron will to do the right thing for the City.”

Being asked if he regretted any decision he had made on the Planning Commission led to discussion among others of the Patent and Trademark Office project. Stew voted against it because he feared that, in the evening, it would lead to a dead zone in Carlyle. Ironically, it will be an active hub on the evening of March 17 when it is the site of the Meet the Legends Reception at which Alexandria will be introduced officially to these outstanding citizens.

Stew has had a lifelong fascination with history. He even had an opportunity to participate in making history. He was an usher at the Inauguration of President John F. Kennedy. Given this interest in history, it was only natural that he would be attracted to Alexandria’s historic side. He has been a trustee of the Historic Alexandria Foundation for 20 years. He has said, “We are the stewards of these historic buildings and it is our duty to preserve them. Alexandria is a truly fine city with a wonderful spirit that moves ahead while respecting the past.”

It is not surprising that Stew balances his busy civic and professional activities with reading history-themed books in his spare time. His most recent indulgence was a biography of Ulysses S. Grant. He does not watch much television, although he makes an exception for Redskin games.

Stew’s wife, Loti Dunn, is a very active volunteer for the Scholarship Fund of Alexandria and in recognition of her dedication to the mission of the Fund, Stew has established in perpetuity four annual scholarships for TC graduates.

Of all the activities in which Stew participates, the one to which he is the most dedicated and which he regards as the most important is his service as a board member and policy maker for the area American Civil Liberties Union (ACLU). He regards the ACLU as the most conservative organization in the country, in part, because it is dedicated to the protection of the Constitution. Prior to the founding of the ACLU, the Supreme Court had never declared any Federal or state law to be in violation of the Bill of Rights (i.e. the first ten amendments to the Constitution). The ACLU provides counsel to parties based on its principles to defend Constitutional rights, and not its agreement with the position of the person or group it represents, and has successfully represented persons and groups such as Oliver North and the Ku Klux Klan. If there is a significant constitutional issue, the ACLU will most likely take the case.

It is in this work that Stew finds his most important challenge: to balance the rights of the majority with the rights of the individual. Stew Dunn has gotten it right there and luckily for Alexandria, he has gotten the balance in his life right as well. He is deservedly a Living Legend.