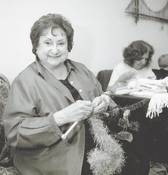 On a windy January day, the Naughty Knitters have made their way to the Community Center building in the Montebello condominium community off Route 1, just as they do every two weeks. They slip into chairs around a long table, pull out bags of yarn, needles and patterns, and begin knitting.

Sitting at the head of the table is Gladys Seisler, who started the group back in 1994. She’s wearing a T-shirt printed with a knitting basket and a ball of yarn that winds around the front, and the words, “Naughty Knitters of Montebello.” Her eyes are bright and she’s quick with a joke, told in the accent of her native Brooklyn. As they have become friends over their knitting, the group has also become a kind of support group for its members as they cope with issues of health and aging, mourning the deaths of loved ones or celebrating the joys of new grandchildren.

The Naughty Knitters were born one night 14 years ago when Seisler turned on the local Cable TV channel. Margaret Conner, then president of Ho Ho Ho, a local nonprofit now called Community Partners for Children, was asking for donations of warm hats, scarves and mittens as gifts for needy schoolchildren in Alexandria. Seisler had learned to knit from a German neighbor woman as a 6-year-old back in Brooklyn, and had kept up her skills over the years. So she decided to start knitting items for the project. She quickly realized, however, that her donation wouldn’t be enough. She thought there must be other knitters in her condominium complex, so she posted notes on the bulletin boards and started talking to people. Pretty soon she had a group of 15 women knitting for the children. They named themselves the Naughty Knitters. Seisler thinks somebody’s husband dreamed up the name, but member Tamara Webb thinks it was Gladys herself. Nobody’s prepared to say for sure.

The Naughty Knitters’ motto is, “Every stitch is made with love.” Over the years, they have donated more than 5300 items to those in need. Besides Alexandria schoolchildren, beneficiaries have included children in Alexandria shelters, homeless kids living in the subways of New York, and orphans in Colombia and Korea. The Knitters have given blankets and baby clothes to teenage moms and other single mothers. One of their regular projects is “Children of Chernobyl,” who come to Alexandria from Belarus each summer to spend some time away from the site of the nuclear disaster that affected the health of many of them and their families.

Kathleen Minnix, host coordinator of the Children of Chernobyl program at Christ Church, says each year the program sends back medicines and winter clothes for all the children who come, as well as their siblings. Many of the children seldom wear clothing that is not passed along from an older child, and even some of the donated items the church collects are used, such as parkas and warm coats. But thanks to the Naughty Knitters, each child also gets to select a brand new set of scarf, hat and mittens bagged in clear plastic so they can see the array of bright colors – and they may also choose a set for each of their siblings. “They love the quality of these lovingly hand-made items,” Minnix said. That the items are new and beautiful is not lost on the children.

Another of the Naughty Knitters’ projects was to send a dozen blankets to a project in Long Island that provides cozy coverlets to children undergoing chemotherapy as part of their treatment for cancer. They have also donated blankets to senior citizens in Alexandria.

Seisler, born Gladys Margolis an indeterminate number of years ago (“I never tell my ago,” she says firmly), graduated from Brooklyn College with a degree in Sociology, and was briefly a caseworker. After her marriage, she moved to Philadelphia, and then Towson, Maryland – her first stay in the Greater Washington area. Moving several more times because of her husband’s job, Seisler ended up on Long Island. She went back to school, became accredited to teach preschool, kindergarten and elementary school, and eventually earned a master’s degree in Special Education. She worked in a school for autistic children, in public schools with special education students, and then in special learning centers for slow learners and for children with emotional, physical and other learning disabilities. In time, she became the coordinator for all special education programs in her school system.

She lived on Long Island until 1992. By then she was retired and divorced. Nothing was holding her there. She considered Florida, but didn’t like it. Her son and his family then lived in Alexandria, and they urged her to come down and explore the area. She arrived in spring, when everything was in bloom. In her real-estate search, she visited the Montebello condominiums – up on a hill, all those trees! – and found her new home. She put her old house on the market, and moved here in October.

As soon as she settled in, she went to a meeting of the condo’s garden club to meet people. At the club’s first Christmas lunch, she won a Norwegian Santa Claus. She still has him, a memento of that warm welcome. She got active on committees, and soon was the editor of the Montebello Times. After the Newsletter Committee, she got active on the Operations Committee and the Budget and Finance Committee. She served as president of the Garden Club. Some years ago she ran for the Montebello Board of Directors. Her 4-year term will be up in April.

One of the initiatives undertaken during her service as a director was the resident artist program. She had noticed that the café/restaurant on the premises had only a few photos of various Washington monuments on its walls. With many professional artists among the condo’s residents, she thought, they could do better. The Board set up a procedure for juried shows. She chairs a small group that monitors the shows, which change every 5 weeks. Each new opening is celebrated with a reception in the café – “a wonderful community event,” Seisler says proudly, looking fondly at the bold colors of the current crop of paintings.

But despite her other interests, Seisler has remained the force behind the Naughty Knitters. At each meeting, she collects and tallies the garments completed since the last gathering. This time, more than 20 items stack up in front of her: soft scarves in a rainbow of colors – some striped, some plain, some tailored and boyish, some fuzzy and girly, many with matching hats; baby blankets, booties, mittens, tiny sweaters for infants, bigger ones for school children. This batch goes to another partner in serving the needy, the Campagna Center preschools.

Of the original members, only 3 remain. “They stay until they move or die,” Seisler said. “Very few just drop out.” But their ranks continue to be replenished, so that today, some 20 active knitters are on the list. Some are relative beginners, like Irene Parris, who only took up knitting in October. For now, she’s sticking mostly to scarves. Others, like Gerry Travis, have multiple handiwork skills. Travis is one of the remaining original members. She knits, crochets, and does embroidery, including traditional Norwegian hardanger style, and has been a regular participant in the Annual Needlework Exhibition at Woodlawn Plantation.

Sharon Hodges, former board member and president of Community Partners for Children, said that Seisler and her knitters have made sure a lot of kids had warm hands, necks and heads. “The quality of the handiwork is phenomenal.”

Pat Miller, former board member and president of Community Partners for Children, calls Seisler “an inspiration to all!”

Mary Karstens, president of Community Partners for Children, nominated Gladys Seisler as a Living Legend. “I thought that recognizing her would inspire others to realize that even the smallest thing can make a difference, and that cumulatively, it adds up to very big things,” said Karstens.