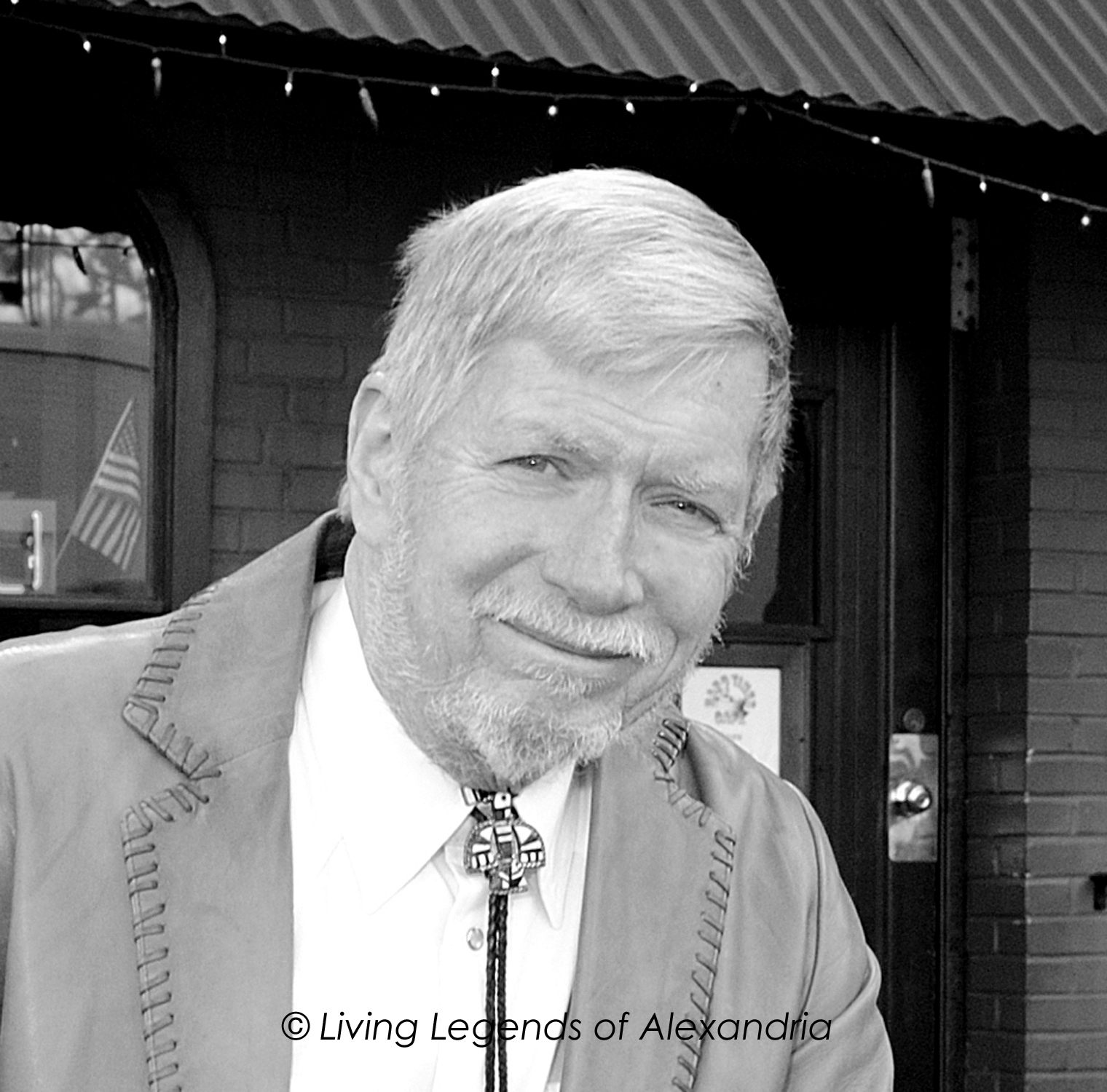 Frederic Goodfellow Parker is recognized for his pioneering spirit and the economic value it contributed to upper King Street and the entire City of Alexandria.

Prior to 1980, someone with a hankering for a “bowl of red” on upper King Street would have had a hard time of it. There were few restaurants or attractions and many tired buildings needed rehabilitation.

“It was a rough area,” recollects Parker. When he and his now deceased brother and business partner Jim picked this location for their legendary chili parlor Hard Times Café, early customers sometimes had their cars broken into while dining inside. “But they kept coming back.” Thirty-four years later, they’ve served an estimated 1.1 million bowls of chili. Aside from the Alexandria location, the Hard Times brand has been franchised to include 15 more venues. Parker manages chili products sales on the company website and stars in You Tube videos to spread his passion to the online world.

James Beard and Julia Child have tasted and praised Hard Times chili. The Zagat restaurant ratings guidebook named it “Best Chili in the Cosmos” and in 2005, USA Today declared it “One of the Ten Best Places” in the country for a bowl of chili. The Parker family has earned more than 100 chili-cooking competitions awards and Fred is an advisory board member of the International Chili Society and on the judging panel of the World’s Championship Cook-off. Fred still judges local chili competitions. One of Fred’s proudest chili booster moments occurred when the chili lobby was founded at Hard Times Café with the mission of making chili America’s official food. A copy of the “Chili Bill” with a picture of its sponsor hangs in Hard Times.

Concurrently, upper King Street grew a Metro station, brick sidewalks, a park, sleek office buildings, elegant hotels, small businesses and national associations, and an array of quality shops and restaurants that make it a desirable destination for locals and tourists, and an income generator for the City.

How chili became the Parkers’ medium for change for Alexandria renewal is derived from a family legacy, their Texas grandfather’s cattle drive chili recipe. In the 1940s, Aunt Irma tweaked and perfected it for her Oklahoma roadhouse and passed the passion for western cuisine to her nephews. Their father’s vintage ranch life photographs decorate Hard Time Cafés walls, including the restaurant’s logo of a boy in a tin washtub. The iconic picture was taken during the Depression and symbolizes the hard times of the past and hope for a better future, Parker explained.

Parker, born in Pensacola, Fla., was named “Goodfellow” in honor of his chuck wagon cook grandfather Ira Goodfellow. He attended Wakefield High School in Arlington, but looked to Alexandria for entertainment. He’d catch a bus to King Street to hang out, and patronized Alexandria’s library and public swimming pool. Later, he attended the University of Arizona and became a graphic designer. While working at the National Gallery of Art on the temporary exhibitions staff, Parker met his future wife, Carol Christiansen, a painting conservator. Today, the couple lives in Alexandria’s Jefferson Park neighborhood in a Spanish Colonial house “that looks like the Alamo.”

While working at the National Gallery, Fred and his accountant brother Jim gravitated to a popular District chili parlor that featured a Texas style recipe. They befriended one of the squabbling owners and nine years after the place eventually shut down, they decided to listen to “opportunity knocking” and establish their own pioneering restaurant at 1404 King Street, using their own carpentry and renovation sweat equity.

Just as the menu has grown beyond the Texas-style chili to Cincinnati style (made with cinnamon, allspice and cloves), Terlingua Red (recipe perfected by his brother Jim for competition) and vegetarian varieties, plus chicken dishes, burgers, sandwiches and salads, so has the vitality of the neighborhood in the passing three and a half decades.

Fred joined the King Street Metro Enterprise Team, and is now a board member of its successor, the Old Town Business and Professional Association, with which he has been associated with for more than ten years. He is a former board member of Friends of the Torpedo Factory and First Night Alexandria, the New Year’s Eve community party of family-friendly entertainment.

Other civic involvements include driving his 73-year-old reddish-brown pickup truck (“the same age as me”) in the George Washington Birthday Parade. The life-size fiberglass horse mounted in the truck bed came from a saddle/tack shop in Laurel, Md. that was going out of business. The “horse with no name” – Parker never gave it a moniker – is routinely decked out in patriotic emblems or seasonal decorations, such as a wreath around its neck at Christmas. The beloved truck has been banged up by a few motorists, but is carefully maintained and gets limited mileage.

During the 1980s, the Parkers began organizing and cooking for chili festivals benefiting the National Kidney Foundation. Hard Times Café regularly donates food to the Rotary Club of Alexandria’s Taste for Giving and the Living Legends of Alexandria’s Meet the Legends reception, and to the Carpenter’s Shelter Cook-off. The restaurant also donates gift cards and benefit nights to schools and other local non-profits. A proponent of Alexandria since his teens, Parker says giving back with personal commitment is the way to better a community.

Recently, Hard Times Café reestablished Open Mike nights on King Street, after neighboring Tiffany Tavern closed, to maintain a tradition of live music in the neighborhood. Parker plays in a band of former colleagues from the National Gallery of Art, including his wife Carol, and characterizes the genre as “geriatric rock and roll”. His brother Jim was a musician, as are his two adult sons Jonathan and Ned (Edward). Jonathan, a graduate of Oberlin, is a jazz sax player who works as a paralegal to support his music. He plays in a band and has just released a critically acclaimed CD. Ned, a graduate of Lynchburg, who studied mathematics and physics, previously worked at the Naval Research Laboratory. Currently Ned is on a travel adventure working on an organic farm in Costa Rica. He plays the guitar and writes his own songs.

Parker says his restaurant is a chili parlor museum and he relishes perpetuating the chili parlor as an American icon. Although in his early seventies, he isn’t inclined to separate himself from the business anytime soon. He isn’t in front of the stove or washing dishes anymore, but has turned his energy and interest to overseeing the burgeoning mail order business of Hard Times Café chili products. Parker stars in a “You Tube” video parody as a patriotic pitchman for chili spices, endearing customers nationwide and spreading the gospel of the home-grown cuisine. He enjoys the recognition when out-of-towners tell him they know his award-winning restaurants and food. Patrons include members of Congress and high-ranking government officials, and national sports and music figures, but mostly hometown folks, tourists, and families looking for reasonably priced, authentic food dine here.

Parker is proud of his “chili slinger” employees, two of them with him since 1980. He says they have mentored him, instead of the other way around, though Parker admits to indoctrinating them in legendary chili parlor stories, family history, and Western Swing music. “Over the years, all these young people have made me feel like I haven’t aged since 1980. “I have found them to be great mentors in keeping me young.”

Staff have gone on to become doctors, dentists, airline pilots, lawyers, stockbrokers, and politicians. “I’m sure they have found Hard Times on their resumes to have been helpful. Many have raised families and now their kids are customers.”

One of Parker’s favorite stories is about a cook who became an airline pilot. “Whenever the airport was shut down because of weather, he would come by and pick up an evening shift. One time the following morning as he was greeting passengers to his plane a man looked at him and said, ‘you look familiar,’ to which the pilot replied, ‘I served you a chili mac last night.”

Stroll inside the King Street restaurant and cowboy crooner Roy Rodgers is lyrically pouring out of the glowing Wurlitzer jukebox. Sepia tone photographs on the wall depict dusty ranches and spare landscapes and hard-working, determined westerners. Glasses clink among convivial patrons. From the open kitchen, the smell of meat and onions frying whet appetites for a hearty meal that any campfire cook would be proud to serve. Up next, a female country western singer tells you she is capable of breaking a few hearts. The front door opens and patrons glance up, feeling as though a true cowboy with a few quarters in his hand will clomp his hard-worn boots to the back to where the music machine plays. No spurs will drag across the red brick tile floor and no lassos hang from the coat hooks – but they could, patrons just presume they could, because they are immersed in western legend and lore the moment they slide into one of the wooden booths or hunker down at a rustic table.