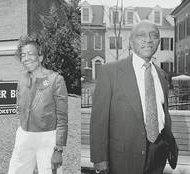 Eula and Melvin Miller have spent more than 50 years making Alexandria a better place to live. His contributions began with civil rights law and came to focus on housing for minority and lower-income people. Hers focused on improving the education and skills of young children and their caregivers. Both were driven by a strong sense of justice and equality.

The Millers have lived in Alexandria since January 1958. They had been married here the year before, choosing the city as a meeting place between his Army posting in Philadelphia and her home in North Carolina. When he got out of the Army, Melvin Miller, who had graduated from Howard University Law School in 1955, was looking for a place to practice law, and as he had passed the Virginia Bar Exam, Eula Miller suggested they try the city where they had married.

Melvin Miller hung out his shingle on a room upstairs from a drugstore at the corner of Alfred and Queen streets. He started with criminal law practice, but soon became involved in civil rights activism, doing pro bono work on school desegregation issues, though not as an attorney of record, and helping those involved with the Arlington lunch counter sit-ins in the early 1960s. He became active in Alexandria city issues, like housing, that affected African Americans.

“I think everybody has a code they live by, and I still have that,” Eula Miller said recently. She had her first major insight into the need to fight injustice when she worked in an Atlantic City hotel between her junior and senior years of college. Her job was helping the head housekeeper check the quality of the maids’ work, inspecting rooms after they were cleaned. One day she saw that the maids had to eat lunch outside at the back of the hotel in the summer heat. She worked in an air-conditioned office. At 19, she reacted fiercely to the injustice, urging them to strike for the right to eat indoors. “Somebody squealed,” she said, “and I got fired. I called my daddy. His response was that I clearly needed a good education.”

Melvin Miller explained his long pursuit of affordable and accessible housing: “I’ve always felt that in this city, with all the good intentions people have — when it comes down to housing the poor, it’s too easy to do nothing.”

The Millers Themselves had encountered difficulties finding a place to live within the city limits when they arrived here, first renting a room in a teacher’s home. “You couldn’t rent an apartment outside the African American community. Most teachers, lawyers and doctors who served this community lived outside the city limits in Fairfax or D.C. and commuted,” recalled Melvin Miller. In his legal and volunteer work, he pursued equity and justice in all areas affecting the civil rights of individuals, but gradually housing issues came to dominate his life, both professionally and in his civic and volunteer work.

Melvin Miller was born in Savannah, Ga., but moved as an infant to Haddonfield, N.J.. He graduated from high school at 16. A bright student, he’d not always seen the purpose of academic striving. A job stocking shelves in a grocery store quickly showed him the value of higher education. Then he heard about St. Augustine’s College in Raleigh, N.C., where tuition was $60 a semester and room and board was $30 a month, including laundry. He figured he could handle that. “It was the first place where people made me think I could do something meaningful,” Melvin Miller remembered. He has since encouraged many young Alexandrians to attend the same school, where he has served on the board of trustees and acted as interim president for seven months in 1999 while the board searched for a new president.

Eula Miller was born in Maxton, N.C. in 1933 and graduated from Bennett College in Greensboro in 1953. She later earned a master’s degree in education from the George Washington University. She taught school in Charlotte, N.C., before her marriage, and again here in Alexandria afterward, but stopped for a while when the couple’s three children came along. When she went back to teaching, she focused on early childhood. She saw that some children were less well prepared than others, so she started tutoring programs to help make up the differences, enlisting the city’s middle class professionals to help.

She saw a need for better skills and education for caregivers. By the early 1970s, she had become a liaison between the Alexandria public schools and the new Northern Virginia Community College (NOVA), working to put together a degree program for classroom instructional aides. Originally, she had meant to return to the Alexandria school system, but by the time the program was in place, she decided to stay at NOVA, where she eventually became head of the Early Childhood Education Program, a position she still holds.

Angie Godfrey, a former school board member and director of Alexandria’s Head Start program, remembers Eula Miller as someone “who will work with anyone and everyone. She has such a vision and a sense of how to support and grow families in a community.” Eula Miller also organized a program to help Head Start families make the transition to kindergarten.

One of her greatest successes was a program for teenage mothers that provided daycare so they could attend classes to study early childhood education. The goal was to teach them better parenting skills, but also to give them the training for careers as childcare providers, enabling them to achieve and to care for their own children. Some went on to further education, including 4-year colleges.

“She willed those kids to succeed,” said Suzanne Chis, Alexandria’s director of Social Services, who has worked with Eula Miller for many years. One of their early efforts was the City’s day care center, which in the early ‘80s did not have credentialed caregivers. Eula Miller’s efforts helped turn the center around by helping provide staff training through the programs at NOVA. While some staffers resisted change at first, Chis said, Eula Miller’s positive outlook provided a circle of reinforcement that encouraged people to grow and brought about positive change. It was the first center for low-income children in the country to receive national accreditation.

Carol Farrell, director of the Office for Early Childhood Development in the Department of Human Services, also has worked with Eula Miller for years and watched her design the courses and open up ways to make the collaboration with NOVA work. “Her goal is to break down barriers to achieve what’s best for children,” said Farrell. “The core of what she’s done is her willingness, her passion, her advocacy for children and their caregivers and mothers.”

Farrell and Chis both note that the story continues. NOVA still maintains a Head Start classroom and playground on the campus that serves city residents. Three years ago, when the city identified a need to provide more training for English language learners who work as caregivers, Eula Miller helped develop a program that combined interpretation and specialized language training with a focus on early childhood education. While learning English, they were also taught better classroom and childcare practices.

Back when the Millers were starting their family, it became clear that pro bono civil rights cases weren’t going to pay the bills, and Melvin Miller took a job as an attorney at the Federal Housing Administration, the predecessor to today’s Department of Housing and Urban Development (HUD). Ultimately, he became director of HUD’s Metropolitan Washington Office. He quit HUD in 1969, but returned in 1977 as a deputy undersecretary in the Carter administration. He retired from the agency in 1997.

Early on, Melvin Miller’s civil rights activism led him to become a member of a group of Alexandria African Americans who met regularly to study issues affecting their community and work to improve the situation. The group was called the Secret Seven. “We didn’t give ourselves that name,” he said. We were actually eight. We think it was an FBI informer who named us after infiltrating the group,” he said. “Nobody was in charge, but we agreed we would have one spokesperson. I was mostly that person.”

The group always met at 10 p.m. or later, Melvin Miller recalled. “We pledged to be available to help each other and discuss critical issues at any time of day or night, by phone or in person. But we also socialized, sometimes gathering with our wives, not talking business.”

The members became active in the political process, interviewing candidates who were willing. Because many of them were federal employees restricted by the Hatch Act, which limited political activities of government workers, they would ask other prominent members of the community to endorse candidates based on the research of the Secret Seven.

Melvin Miller unsuccessfully ran for City Council in 1963 and for mayor in 1976, but felt it was important to challenge the system and set a precedent for African Americans. He was appointed to the Alexandria Housing and Redevelopment Authority (ARHA) in 1970, serving as chair until 1977, when he returned to HUD. Miller was a member of the School Board from 1986 to 1993, serving as chair from 1990 to 1992. He was appointed to the State Council of Higher Education by Gov. Linwood Holton in 1971. He served for eight years.

Melvin Miller is proudest of his work in the 1970s, when he, George Cook, Wiley Mitchell and Ira Robinson sat down in Mitchell’s kitchen and drafted a resolution that led to an agreement between the City and ARHA that no public housing in the city would be destroyed unless there was a provision for one-for-one replacement. Though modified somewhat in the 1980s to allow “publicly assisted” units that were not directly public housing, that agreement still underlies the City’s housing policy, he said.

Melvin Miller was reappointed to the ARHA board in 2000 and has been chair since 2001. Connie Ring, another ARHA board member, said Miller’s strength has been his ability to look at ARHA development projects and come up with a viable way to redevelop neighborhoods. For example, doing the Glebe Park and Bland projects together worked because of the high land value in the Bland neighborhood, which saved city taxpayers money. The combination of replacement public housing with market value housing has made the whole project economically feasible, Ring said. The project was approved on Oct. 18, 2008.

“Except for the determination, skills and perseverance of Melvin, I don’t think we would have been able to get the whole project through City Council. Of course Council and other civic leaders contributed a lot to the process, but the one person who was indispensable was Melvin.”

Ring also remembers Melvin Miller’s contribution to civil rights efforts in years past, and remembers Eula Miller cooking breakfast for some of their gatherings at the Miller home.

Ferdinand Day cited Melvin Miller’s time as a spokesman for the Secret Seven, and called him “a trusted friend for a half century. As a civil rights attorney, he inspired and provided courageous leadership to generations in search of justice and equality.”

Former School Board member Shirley Tyler said she relied on Melvin Miller for advice and counsel for many years. She appreciated his insights on education, but also on public housing issues. Tyler said she thinks Alexandria’s housing policies have been more successful than in other places. “Small clusters give a sense of community,” she said. She also cited the importance of residents’ “sense that people like Melvin were on their side and looking out for their interests.” She believes that scattered site housing has been a positive development.

The Millers had three children, one of whom is deceased. They are proud that their children were educated at Amherst, Harvard, Yale, Stanford, Georgetown, and the George Washington School of Law. All four of their grandchildren live in Alexandria within minutes of their grandparents’ home. Their children explain the return to Alexandria after their schooling this way: “We like home.”