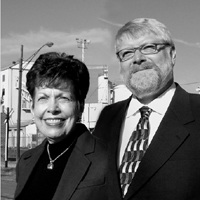 For the first time in 63 years Alexandrians awoke Monday morning, October 1, 2012 with no air pollutants emanating from the stacks at the Potomac River Generating Station at the north end of Old Town. The GenOn Power plant had officially shut down at 12:01 A.M.

That long awaited event was marked by a press conference headed by Alexandria Mayor William “Bill” Euille just outside the plant’s main entrance at the intersection of North Royal Street and Bashford Lane. A large crowd of elected officials, city employees and involved citizens applauded as Euille announced, “Today marks the permanent closing of GenOn. For decades this has been the single most polluter in Northern Virginia. That ends today.”

Among the crowd were two people to which this event culminated more than a decade’s work, perseverance, dedication, and fact/statistical driven tenacity that often pitted them against a combined corporate/governmental bulwark that was determined to break their spirit. Elizabeth Chimento and Poul Hertel commenced their crusade against Pepco, owner of the PRGS, in the spring of 2001 after noticing a grey soot residue on their homes and vehicles.

But, their greatest fear was that the residue was probably also creeping into their lungs and those of their neighbors with every breath they took as North Old Town residents. Those fears were confirmed by several studies undertaken by scientists retained by them and eventually Alexandria City government.

“For the first time since the late 1940’s the people in these adjacent neighborhoods can now breathe without downwash (a term for airborne pollutants sinking instead of rising). This plant has long been a mistake that needed to be corrected,” Hertel said following the press conference.

“The event we celebrate today has been a long time coming. But, in the end we prevailed. The job is done. There were many issues in this process that few people are fully aware of. And, there was no way of avoiding the politics, particularly at the state level,” Chimento said.

Euille praised the pair’s initiative in his openi ng remarks noting, They came to us and said “This needs to happen,” referring to the closing of this plant. “Today is a great example of the community and local government working together,” Euille stated.

He was followed by U.S. Representative James Moran (D-8) who gave a full litany of all the various air pollutants that have been spewing from GenOn stacks over the past six plus decades. “This is a hard fought and well-earned victory for this community. This event is due to citizen involvement,” Moran said.

“Mirant was forced to cut back and make adjustment to the plant that caused them to not be able to compete in the market place. The example of what Alexandria has accomplished should be used by communities all over this nation that are suffering from coal fired power plants,” he emphasized.

“Power plants rarely get along with their surrounding communities but Mirant had particular problems. Overall there are 264 power plants nationally that are presently exempt from the Clean Air Act. Those communities need to do what Alexandria has done. There have been 95 votes in the House of Representatives in the last year alone to weaken the Clean Air Act,” Moran told the audience assembled on the parking lot facing the antiquated power plant.

“The future of this site will be a community process. The city is presently in discussions with GenOn as to the various phases of the decommissioning process,” said City Councilman Paul Smedberg (D) who, along with City Councilwoman Redella “Del” Pepper (D), co-chairs The Mirant Community Monitoring Group.

Pepper summed up the overall reaction to the plant’s closing with her declaration, “It’s over. It’s closed. We can now all take a deep breath.”

Although the plant is now silent it is not quite over. There is the decommissioning process and the removal of the large coal pile that covers the ground just beyond the railroad tracks coming into the 25 acre site as well as soil contamination studies.

The Monitoring Group of which citizen activists Chimento and Hertel are members, along with the Virginia Department of Environmental Quality will continue to oversee this process. As an element of the formal shut down the City will return to GenOn the $32 of the $34 million it has held in escrow as part of the 2008 agreement for pollution control efforts.

Pepco continues to own the site with GenOn holding a 99-year lease. They have indicated that no “business decisions” will be made about the site until all aspects of the decommissioning process are complete.