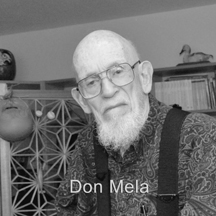 From his perspective as an 87-year old, Don Mela sees public service as an integral component of a life well-lived. “I’ve seen a lot of Alexandria history. If you are into things, you get to know people. As a consequence, the more you stay in a town and get to know people, you understand that giving back is an important part of life.” For his accomplishments as a volunteer, civil servant, lawyer and advocate, he is a 2011 Living Legend of Alexandria.

Mela recently reflected on public service in his own life, and links it to Cicero’s definition of a life well lived. Cicero said that if you give back to your country, to your family and to fellow citizens, you will have lived that life. “I spent three years in the Army to serve my country, and I have always cared for my family. My voluntary public service gave back to fellow citizens. I never explicitly ever thought about it, but my father’s teaching and example did have an influence on what I did with my life. I never had any trouble in finding things to do.”

Mela was born in New York City and attended public school in nearby Pelham, N.Y. He was a Phi Beta Kappa at the University of Michigan, where he earned his B.A. in mathematics. In the first semester of his junior year at Michigan, his studies were interrupted by WWII. He served three years in the Army, primarily at Guadalcanal. He never came under fire and never had to fire a shot, “so I was one of the lucky ones,” he reflected soberly. He returned to the University of Michigan to earn his master’s degree, and, in 1949, met his future wife, Doris, who was on campus to earn her master’s degree in library science. They’ve been married for 61 years and had four children, and now have seven grandchildren scattered about the world. They first lived locally in Arlington in 1951, and in 1958, bought their first home in Alexandria.

Co-nominator and neighbor Ann Kaupp praises Don and Doris Mela for making the Marina Towers community more homelike with their committee involvement, his accordion playing at Thanksgiving sunrise gatherings, and their charming, sociable natures. Mela enjoys mathematical puzzles, statistical analysis, good conversation, is an avid music collector and a competitive Scrabble player. In their younger days, the couple enjoyed attending the opera, and book festivals on the Mall. He loves the computer and stays in touch with far-flung family via email.

From 1960, Don was politically active in supporting City Council campaigns and was president of the Strawberry Hill Civic Association. With other neighborhood association presidents, Mela fought for open space preservation in the city and against harmful developments. He spent 12 years as a member of the Alexandria Planning Commission, retiring in 1977. Early in his term there were applications before the commission to build a large high-rise development on the waterfront where Founders Park lies today, and another high-rise on the site of the Lloyd House at Queen and Washington Streets. These were voted down and then 4-3 votes of the Planning Commission and the City Council led to an ordnance setting building height and setback restrictions in the Old and Historic District. In Don’s opinion this was the most significant action in which he was a participant, for it prevented a drastic change of character in the Old Town. Much later, he served on the Washington Street Guidelines Committee, which refined and tightened regulations for building on Washington Street, a major Alexandria thoroughfare, in order to preserve its memorial and historical character.

In his professional life, Mela worked 17 years as an analyst at two Defense Department “think tanks” and then as a civil servant in the U.S. Transportation Department, serving as the chief of the Mathematical Analysis Division at the National Highway Traffic Safety Administration. After his retirement from the federal government in1981, Mela entered the George Mason University Law School. He jokes that he was the only person in his class of 1984 to pass the bar exam and collect his first social security check in the same year. His wife Doris helped put Don through school by working as a librarian at the National Biomedical Research Foundation at Georgetown University.

After obtaining his law degree, Mela performed pro bono law for the economically disadvantaged. His role model was a man who started a storefront legal clinic on Fairfax Street across from the courthouse before Legal Service came to Alexandria. He credits his good friend Judge Bill O’Neill, a former president of the Alexandria Bar Association, for identifying a segment of the population whose income was too high to qualify for legal aid, but who couldn’t afford to pay a lawyer. In one of his own first advocacy cases, Mela volunteered to become a legal guardian and provide legal services for a near comatose woman whose son was misusing her financial assets while she was in a nursing home. In 1997, Don Mela received the Virginia State Bar Association’s Lewis F. Powell, Jr. Pro Bono Award for “helping the poor obtain legal services or in providing those services himself.”

With his wife, Mela joined the Alexandria League of Women Voters, where his intellect, wisdom and humor were welcomed. Judy Miller, who along with Ann Kaupp nominated Mela for the Living Legend Award, recalls that he was a “contributing male member who gave insight and substance to many of our discussions and events.” He served as the organization’s membership chairman, and organized and moderated at least five issues sessions. He bemoans the fact that women appear to have less time to advocate more fully in the local political process “because there’s been a change in culture and in women’s careers.” Mela observes that his and Doris’ own health and aging issues limit their public participation in late life, but he hopes younger, able community members will stay involved. “I fear what is to come. This country has some really big problems that we don’t seem politically prepared to solve.” He wryly comments that through his own lengthy political involvement and personal acquaintance of city leaders, “I knew where a few bodies were buried,” a not insignificant element of civic oversight.

Don has volunteered for several charitable organizations, such as ALIVE, where he sorted donated materials and delivered food to shut-ins on a weekly basis for many years. For more than 30 years, Don and his accordion accompanied the Shuter’s Hill Ecumenical Carolers in their serenade of area homes at Christmas to raise money for Children’s Hospital. He still plays the accordion and favors ethnic folk songs and operatic arias. “I play anything I am capable of,” he says and launches into “Amazing Grace” and other traditional songs. For years, he played “bit parts” in musicals and other productions organized by Lois Kelso Hunt.

Were Don Mela’s father alive to witness his son’s accomplishments on behalf of country, family and community, the elder Mela might have cited another Cicero quotation that has guided his son, “The good of the people is the greatest law.”