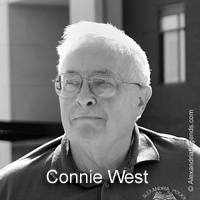 If the City ever establishes an official position of Alexandria Amanuensis, 2014 Living Legends Converse “Connie” West would be a shoo-in for the job.  He has documented and continues to record officially the business of numerous Alexandria organizations as their secretary.  Currently, he is secretary of Agenda:Alexandria, the Holmes Run Park Committee (which he has also chaired), the Hallmark Condominium Board of Directors, and the Alexandria Federation of Civic Associations.

But Connie’s contributions go well beyond serving as secretary.  He was born in Greenfield, Mass. and raised in Northern New Jersey, where his father was an accountant and his mom the town librarian giving him a double set of genes which may have contributed the traits that make him such an accurate and conscientious secretary.  After graduating from Drew University in Madison, New Jersey, he tried a year of law school before being drafted into the U.S. Army.  That 26-month service included a tour of duty in Korea.   Some fifty years later, Connie’s stepson was at the embassy in South Korea and Connie returned to a very different country.  Except for the strained relation with North Korea, South Korea was an interesting place to visit and he enjoyed seeing the changes.

After military service, Connie settled in the Washington area where he pursued a thirty-year career in insurance.  The now retired life insurance underwriter moved to Alexandria in 1976 and has been active in numerous City organizations since his earliest days here.  One of his longest connections with the City has been as a volunteer with the Police Department.  He began in 1989 by answering telephones and taking routine reports, freeing officers from these desk duties.  Eventually, he successfully completed some of the courses offered by the Police Academy and logged over 5,200 volunteer hours of service, the equivalent of nearly 3 full-time years.  When the City created a part-time paid position to perform these duties, Connie applied a,d although in his eighties, was selected for the job.

“The City always backed us up and gave us a lot of responsibility to perform our duties as volunteers.  It hasn’t changed that much since I became an employee, except I have a little more time to do my job.  But the City always viewed volunteers as occupying full-fledged positions.  It was surprising at first that they backed us so strongly.   I really love this new job and enjoy going to work every day, not something I always felt about insurance I must confess especially when all those end of year reports were due.  The people I am working with at the Police Department are wonderful.”

He laughingly observed that coming into a job at this stage of life has the added advantage that you aren’t very focused on your career path.  Somehow, the next promotion is not all that important when you are in your eighties.

Asked if there were other volunteer duties that might be available, Connie mused that he knows that volunteers review pawn shop transactions.  Pawn shops inventories are checked against lists of stolen property and often items are identified and recovered through these volunteer activities.  Volunteers are also used as translators and ride with patrol officers.

West was nominated by Roberta “Bobbie” O’Brien who wrote, “Connie has fulfilled all the volunteer roles that he has taken on with integrity and competence.  He has done so with the steadiness and calm for which he has become so well known…. Connie continues to serve with enthusiasm on 4 civic commissions and boards but he has also been in the trenches and no job that needs to be done has been too small for him.”

West slowed down for two years which he spent caring for his wife Nedja prior to her death in 2006.  From Nedja, Connie inherited 2 stepsons who live with their families (including 2 step-grandsons) in this area.

West does find time for himself.  He enjoys Public Broadcast productions such as Masterpiece Theatre and has a long queue of movies he wants to see on Netflix.  Unfortunately, for each one he sees and returns he seems to add at least one new one.  He enjoys reading mysteries including humorous ones by Janet Evanovich.  He also enjoys adventures by Clive Cussler.  He hasn’t played sports since he played high school football but like many people in this area he follows the local teams, especially on television.  He was never a season ticketholder but he did go to one or two Redskins games each year and he has been to Nationals Parks to see the Nats play.  At his age, he prefers watching the games on television to going in person.

The biggest change he has seen since he arrived in Alexandria is the development of Carlyle.  He walked over that area when he first arrived here and there was nothing there.  Now, there are big buildings and the National Science Foundation will be coming soon.  He sees the same sort of potential for Potomac Yard.  And if they build it, Connie West will probably record it.