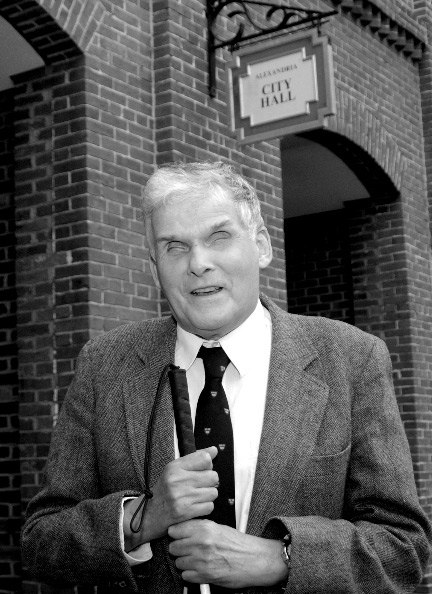 While many Alexandrians don’t know Chet Avery’s name, they take for granted many of the important enhancements he’s helped to bring about: curb cuts; a central library with no stairs and an office dedicated to serving Talking Book users; an accessible courthouse, including accessible courtrooms; voting machines that persons with all disabilities can easily use independently and a human rights ordinance that includes persons with disabilities as a protected class.

Chet Avery, a long-time resident of Alexandria, has been active in devising and promoting programs enabling those with disabilities to participate fully in all life’s opportunities.

For nearly 30 years he has served as a member of the Alexandria Human Rights Commission. His life’s work is dedicated to extending accessibility to all persons.

While many Alexandrians don’t know his name, they take for granted many of the important enhancements he helped to bring about: curb cuts; a central library with no stairs and an office dedicated to serving Talking Book users; an accessible courthouse, including accessible courtrooms; voting machines that persons with all disabilities can easily use independently and a human rights ordinance that includes persons with disabilities as a protected class.

“I was a youngster who had just been appointed to serve on the Alexandria School Board when I met Chet,” Euille said. “As a School Board member, I saw the need for a Special Education Advisory Committee and we selected Chet to be a member of that first group. For more than 30 years, he has been an advocate for children with special needs and for all persons with disabilities in Alexandria and throughout our country. He has helped to bring about changes that have made a difference in all of our lives. He is very deserving of this honor.”

Avery began his work as an advocate for persons with disabilities when he lost his own sight because of detached retinas. He was 17 years old. During his last year of high school, he visited friends at Harvard and decided he wished to attend the university. “I spoke with the dean during one of my visits and he told me to go back home, get good grades and demonstrate my leadership skills and I would be a strong candidate for Harvard,” Avery said.

Avery earned his bachelor’s degree in history but decided to return to Harvard for a master’s degree in counseling and education. On the first day of class, a young woman sat down next to him and they were married a year later. “She was beautiful then and is still beautiful now,” Avery said of his wife Sabra.

In 1967, the Averys moved to Alexandria, to the home where they still live on Linden Street. “We’ve lived here longer than almost everyone on the block and we love it,” Avery said.

Jean Niebauer is the director of the Alexandria Office On Human Rights. “Chet Avery is a tireless advocate for persons with disabilities and I admire his tenacity, intellect and commitment to Alexandria. Chet pushes all of us in the City to do more, and more quickly, and I have no doubt that we would not have achieved as much as we have, as an accessible City, without him,” she said.

As part of his federal job, Avery oversaw the development of a handbook on federal student financial aid, served in the Office of Special Education monitoring the implementation of Section 504 of the Rehabilitation Act of 1973 and then in the Secretary’s Office of Disability Concerns. He is also a member of the Board of Directors of The Washington Ear and was instrumental in developing the first descriptive videos in theaters.

“When blind people attend plays, they have no idea what’s happening on stage with regard to scenery and activity. In 1981, Arena Stage began offering descriptive videos for visually handicapped individuals during plays. Since then, that has expanded and many venues have descriptive videos, including movie theaters,” Avery said.

Since his retirement, Avery has continued his work in Alexandria and served on the Virginia Rehabilitation Council and the Virginia Assisted Technology Commission, appointed by then Gov. Mark Warner. “Both of those groups have accomplished a lot,” Avery said.

Most recently, Avery was instrumental in advocating for the purchase of an electronic voting system that is accessible to all persons with disabilities. “He went with us to look at the available voting equipment and advocated for the system he felt was the most accessible to the most people, the system we eventually purchased,” said Tom Parkins, Alexandria’s registrar of voters. “I really believe that it was his persistence that convinced City Council to purchase the entire system rather than phasing it in. He’s amazing.”

He is the recipient of the Alexandrian of The Year Award for 2008, was enrolled in the Sanford High School Hall of Fame, received the Alexandria United Way Volunteer of the Year Award, the 1998 John Duty Collins Outstanding Advocate for Persons with Disabilities Award, special awards from the Alexandria Special Education Advisory Committee and the Alexandria Human Rights Commission.

Avery spends his time reading with his two granddaughters and enjoying Alexandria’s parks with them. He also watches movies on his computers and stays in touch with friends and colleagues via email.