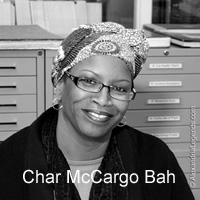 Char McCargo Bah has a passion for African American history and genealogy, most particularly in Alexandria. Through her research, speaking and writing on this topic, she has made a lasting contribution to our city.

A native Alexandrian, Bah grew up in the Parker Gray District and is a 1975 graduate of T.C. Williams High school. She graduated from the University of the District of Columbia in 1982 with a bachelor’s degree in Urban Studies. In 1983, she received a second BA in African American History.

Bah has researched and reported on the history and genealogy of Alexandria’s African American Community for more than thirty years. She had a pivotal role in the publication of African Americans of Alexandria Virginia – Beacons of Light in the Twentieth Century, which she coauthored with four other volunteers. Believing the research and writing done in conjunction with a project at the Charles Houston Recreation Center to honor Alexandria African Americans could become a book, she found a publisher. Bah served as the primary genealogical researcher for the book, which features the narratives of 63 African Americans who made a difference in the City during the years 1920 to 1965. It is the first substantial book of African American history of its kind published about Alexandria. It was Bah’s idea that all author royalties and all profits from sale of the book within the City’s museum shops should go to the Office of Historic Alexandria to fund future African American History projects through the Alexandria Black History Museum.

Bah has offered workshops and lectures at the Alexandria Black History Museum since 1995, working as a volunteer until recently, when the museum began paying for some of her services. From 1999 to 2005 she facilitated the Alexandria chapter of the Go On Girl Book Club, which also met at the Museum. The club is a national organization focused on reading works by African American authors. She began volunteering with the Friends of the Freedmen’s Cemetery in 1997. Based on her work, Bah was asked in 2008 by Dr. Pamela Cressey, then Alexandria’s City Archaeologist, to help find the families of people buried in the Freedmen’s Cemetery. For nearly 20 years, people had sought to find African Americans who were in Alexandria prior to the Civil War but only one family was found. Within two weeks of accepting the offer to locate descendants, Bah found four more families. Since then, she has found the families of 130 of the deceased. Last year she was hired to lead the continuing research for the cemetery.

Bah maintains a blog, The Other Alexandria, about the projects she researches on Alexandria history: Parker Gray, the Contrabands and Freedmen Cemetery, Fort Ward Park, and other topics. She lectures across the country on her Alexandria research.

Bah’s primary career is with the Federal government, where she is now a policy writer in the U.S. Department of Veterans Affairs. Her second career, as a genealogist, grew out of her passion for African American history and the individuals who made it.

Char is married to Mumini M. Bah, and they have a grown daughter. When the family lived in Sierra Leone, West Africa from 1987 to 1989, Char recorded oral histories of the ethnic groups of her husband’s home country. On October 22, 2013, the Alexandria Archaeological Commission awarded Bah the 2013 Ben Brenman Archaeology Award for Outstanding Genealogy for her work on the Alexandria Contrabands and Freedmen Cemetery.