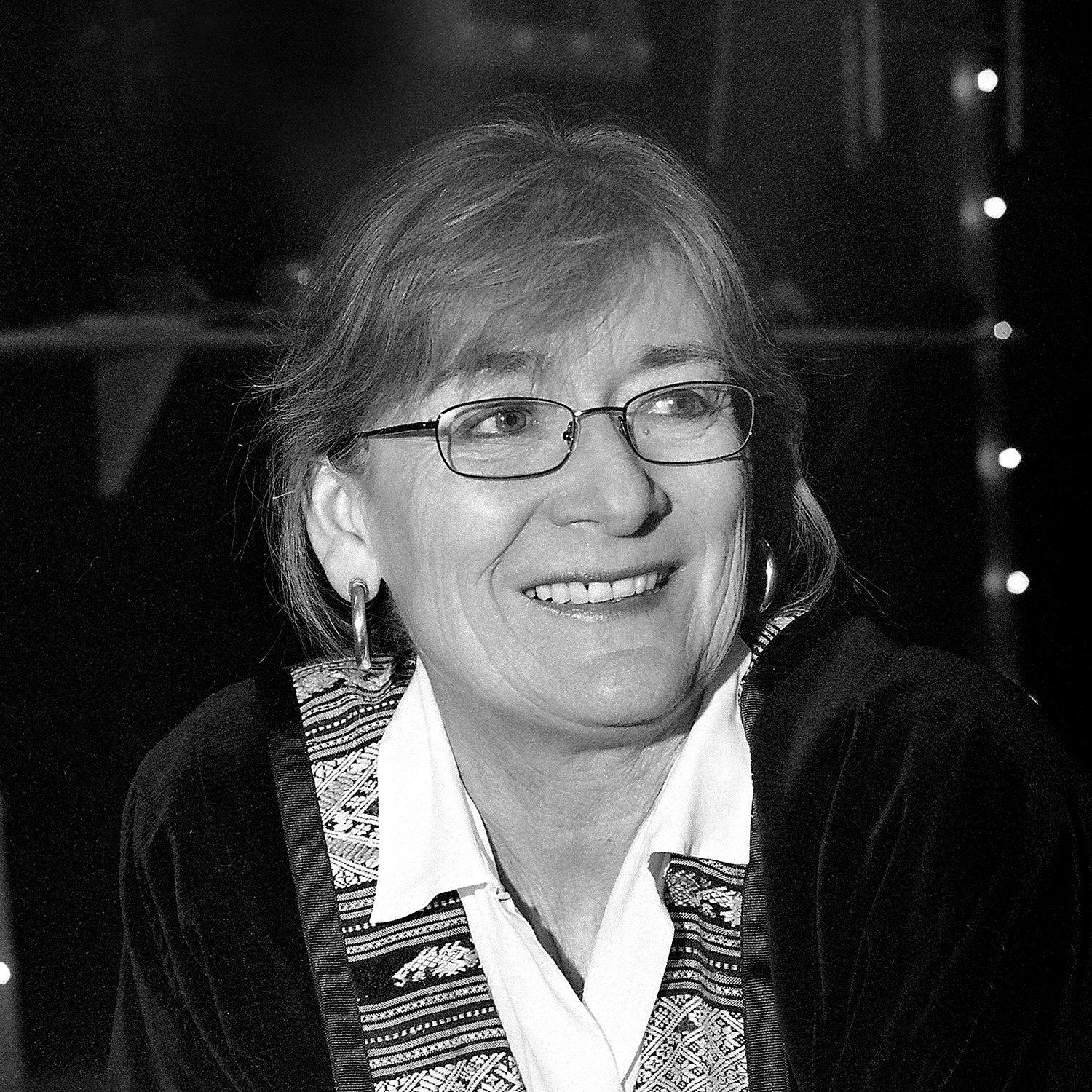 Carolyn Griffin has been bringing live theater to Alexandria since 1984, when she was part of the startup of American Showcase Theatre Company (ASTC). She was invited to an organizational meeting by Jill Kamp, an acting teacher who wanted to start a professional theater to showcase her acting company. They started working out of Kamp’s dining room on West Windsor Avenue. Griffin, armed with a just-completed MBA from Georgetown and having just had the third of her four children, plunged in as a volunteer and board member. She soon became the managing director. A few months later, developer Oliver Carr gave the new theater group rent-free office space in Shirlington, and the company began performing at the Lyceum.

Two years later, Carr offered them space in the old Station Shops Shopping Center on Duke Street, and they built a 65-seat theater for $16,000, raising money initially through a corporate breakfast – a new concept at the time, Griffin recalled. Alexandria developers, including Roger Machanic, were among the contributors. Skip Maginniss, a principal with BMK Architects, designed the space.

The theater opened in 1987 with a production of playwright Athol Fugard’s Blood Knot,featuring two actors, Bill Grimmette and Nat Benchley. They each won Helen Hayes nominations for best lead actor in a resident production, the first of many recognitions of the theater’s excellence. The play began a long tradition of producing Fugard’s South African plays. ASTC offered serious drama, comedy, and premieres of new work – including contemporary American plays, and often featuring local playwrights. Over time, the theater introduced cabarets and small off-Broadway style musicals, still a specialty.

Griffin’s MBA often came in handy. Fundraising and managing the business end of the theater were critical. In 1992, as the Carlyle development began to take shape, the theater lost its space. Norfolk Southern spent $150,000 building out a larger, 85-seat space a bit further down the street – again designed by Maginniss. At that time, Kamp moved on to other ventures, and Griffin took over as artistic director of the theater, which she renamed MetroStage.

MetroStage produced several successful seasons in the second Duke Street space, but in 1995 was displaced again by continuing development. This time the search for new space took longer, and involved a long fundraising campaign. In the interim, the company produced cabarets and did readings of new plays at the Lyceum and in other spaces around the Washington metropolitan area, continuing its tradition of showcasing performers in small, intimate spaces.

The current theater at 1201 North Royal Street opened in 2001. Long-time supporters Mel and Donna Bergheim were actively behind the fundraising campaign to convert the warehouse space, which had formerly housed the Smoot Lumber Company. Mel, a former vice-mayor, believed that the theater was not only a cultural asset, but also an economic development asset to the city. So he lobbied City Council to give MetroStage a 3 to 1 matching grant that helped complete the capital campaign. Supported by then Mayor Kerry Donley, the city offered a grant of $50,000 if the theater could raise another $150,000. These sums brought them to their goal, and made possible the $450,000 construction of a 150-seat theater with a spacious lobby and upstairs office space. Maginniss and BMK won an award from the American Institute of Architects for the project. The inside theater space was named for Donna Bergheim in recognition of her fundraising and support over the years. The theater has continued to pursue its mission of producing dramas, musicals, new work, and cabarets.

Asked how you get from an MBA to being a theater director, Griffin said she always appreciated and loved the power of theater. Born in Long Beach California, Griffin spent her early years in Hawaii, where her father served as a Naval officer. By the time she was in high school, they lived in Akron, Ohio. With her family, she regularly attended theater performances in Cleveland. After high school, Griffin attended Connecticut College. She came to Alexandria in 1969, moving into Parkfairfax with a husband in law school and a 2-month-old baby. She earned a BA in psychology from George Washington University, an MA in the same subject from Catholic University, and then that MBA.

Then as now, she had tremendous energy and a gift for involving others in her passion for the theater. Architect Maginniss and his wife Mary were friends from the Parkfairfax days. They had children the same ages and were members of the same babysitting coop. Maginniss served for many years as a board member as well as designing its theater spaces. “It is entirely because of her dedication that the theater has continued as an Alexandria institution,” Maginniss said. “She brought a legitimacy to the ensemble approach. In the eighties, she was really out front in terms of the types of theater she was putting on – the content.”

MetroStage is the oldest professional theater in Northern Virginia and is a member of the League of Washington Theatres. Yet keeping a professional theater company going is not always easy. Griffin’s supporters say that her tremendous drive and dedication, her love for theater and her total immersion in it, as well as her knowledge and business sense are critical. But clearly another big part of the equation is her connection to this community, her longtime friendships and the loyalty of supporters.

Attorney Beau Brincefield runs a law firm with 10 lawyers, but he’s also a professional actor who’s performed in movies, on stage and in television dramas. He met Griffin when he was cast as the male lead in an early production, “Talking Things Over with Chekhov,” and has been a supporter ever since. “She has a talent for identifying plays that deserve exposure. She has never compromised her artistic sense for the purpose of making money, which has made the road tough for her,” Brincefield said. “She uses her personal energy and human capital, her drive and dedication to make up for the limited resources she has to draw on to create and sustain a professional theater with high standards of artistic integrity.”

Trudy Levy, a past president of the theater’s board, went to acting school with Jill Kamp. Arriving in the DC area right after law school, Levy reconnected with Kamp and promptly became a board member – and met Griffin. “Carolyn is pretty much a force of nature, a visionary and very smart,” Levy said. She also cites Griffin’s contribution to the community, such as bringing professional actors and playwrights into Alexandria’s schools and recreation centers “to enrich the lives of youngsters and to ensure a future audience for live theater.”

Roger and Grace Machanic were there at the beginning and are still among the theater’s supporters. Grace is an emeritus board member and has choreographed productions for the theater. Roger helped to fundraise and negotiate for the space for the present location. Grace lauds Griffin’s integrity and intuitiveness, her determination. “She doesn’t lose her focus, she has a goal. No matter what comes her way, she keeps on and gets the job done.” Grace Machanic said the current focus on musicals makes her happy. “I just love to hear beautiful voices. Good music picks me up.”

Sherry Brown, who served the theater as director for management and resources for 11 years, said, “Carolyn brought the world to Alexandria, especially through the South African plays. I remember we were the first theater production ever reviewed in Pravda. One of the actresses was dating a Soviet reporter here and they published it – a good review by the way.”

Old Town North resident Marie Tavernini was pleased when MetroStage came to her neighborhood, putting a theater within walking distance of both her home and law office. Tavernini now serves on the theater’s board, and lauds Griffin’s energy and commitment, as well as her artistic goals. “She seeks out and produces plays and musicals that encourage social and cultural understanding while entertaining.”

Griffin says theater must entertain, but that the audience needs something more to take home with them. Of the 500 scripts she sees each year, Griffin said, “The ones I choose have to have hope. That’s the redeeming feature.”

What continues to motivate her, Griffin says, is, “the opportunity to choose work I believe in, to offer extraordinary roles to actors I believe in, and to share with an audience the results. I value it, I treasure it, and I have sacrificed for it.”