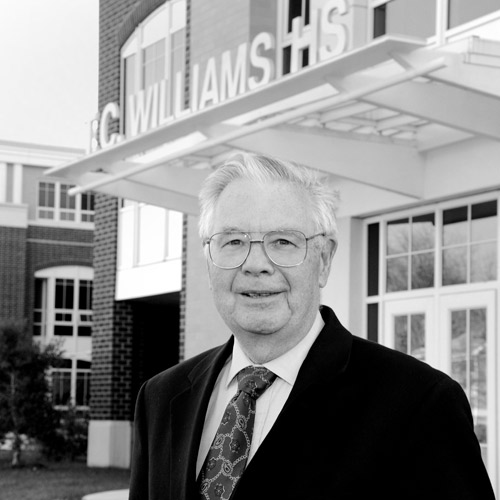 Contemporaries describe Carlyle “Connie” Ring as a conservative Republican. “No,” he responded, “I am a Rockefeller Republican who in the 1964 presidential election won the local delegation for Nelson Rockefeller, then proved I could run hard for Barry Goldwater. I was nominally Republican until moving to Alexandria.” Connie Ring chaired the Alexandria Republican City Committee from 1961-1968.

In 1956 in Jamestown, New York, an elementary school was named in honor of his educator father the same year Alexandria threatened to close its schools as part of U.S. Senator Harry F. Byrd’s (D-VA) massive resistance scheme. “Central in life is the fact that education is a necessary part of success and it was silly to close schools,” Ring mused.

“Alexandria’s schools did not integrate easily,” Ring said. “We lost 5,000 students—from 18,000 to 13,000 students—with integration. People voted with their feet and enrolled in private schools. Today any well-motivated child can get a good public school education.” Connie Ring served as an appointed member of the Alexandria School Board from 1969 until 1978; as Chairman from 1976 until 1978.

“In 1956 Alexandria was a segregated town with a segregated school system, a southern community of 70,000 people,” Ring recalled. “To be anybody in Alexandria you had to be related to the first families of Virginia, to have native blood. It was hard to break into the real center of power. The electorate purposely was kept small.”

“I remember registering for the 1956 Presidential election,” Ring smiled. “Eisenhower was running against Stevenson and I wanted to vote. I was given a blank piece of paper and then asked certain questions to answer in writing. I wasn’t impressed and I told him, you’re helping out a damn Yankee. What would you have done for a black? I sued; Ring v. Board of Elections.” Connie settled for adoption of a standardized registration form.

“Alexandria, and Virginia generally, was for much of the latter half of the 20th century a very strong two-party town,” explained former State Delegate and City Councilman David Speck. “It’s just that both parties were Democrats—one party was the more progressive Democrats, the other the Byrd wing of the party. The gaping hole was in the middle and that created the opportunity for a genuinely competitive political process.” Speck first worked with Connie Ring as a member of the Alexandria Republican Party and then joined the Democratic Party in 1995.

Speck continued: “With the [1969] election of Linwood Holton as the first Republican Governor since Reconstruction, the election of Wiley Mitchell to the City Council, moderate Republicans with deep roots in the community—people like Wiley Mitchell, George Cook, Bob Calhoun and Connie Ring—began to be viewed as viable choices by voters. In 1982, the city of Alexandria had the most elected Republicans of any city in Virginia.” Connie Ring served on Alexandria’s City Council from 1979 until 1988.

“Connie Ring was on the Council that appointed me City Manager,” Vola Lawson recalled. “In those days the Republican Party was known as the progressive reform party. Moderate Republicans teamed with liberal Democrats and ousted the Byrd machine.”

“He reminds me of Teddy Roosevelt,” Republican City Councilman Frank Fannon said. “Connie speaks softly and carries a big stick.” Ring is persistent if nothing else.

“Connie draws great strength from his moral beliefs,” said former Republican State Senator and City Councilman Bob Calhoun. “There is an enormous sense of integrity about him.” Ring often takes on tasks that are difficult to accomplish.

Ask Ring to explain his greatest accomplishment and he discusses law, the Uniform Computer Information Transactions Act of 2000. The Act is “the only law that addresses valid contracts over the internet.” Controversial to some—Virginia and Maryland passed it—Connie favors it. Others cite the Uniform Commercial Code, Article 4A [wholesale fund transfers] as his crowning achievement. Article 4A was adopted by all 50 states.

What is Ring’s life lesson? “Happiness really comes from being of service to the community. A lot can be accomplished by being in the background and sharing the limelight with others. Grab the limelight too soon and you can stumble.”

“Connie’s lesson, which seems to have been largely ignored in recent years at the local Republican Party level, is to nominate political candidates who appeal to an ideological center,” Speck noted, “and who have a record in the community of genuine service.”

“Never, ever did Connie Ring back down from what he believed to be right,” Speck concluded. “Not just for the political expediency of an issue, but for what he believed  to be important for our future.” “Connie is future-oriented,” Calhoun agreed.

“The art of politics is compromise,” Ring repeated. “If there is any secret to my success with uniform state laws it is my ability to bring people together and develop consensus. Always we must find common ground.”