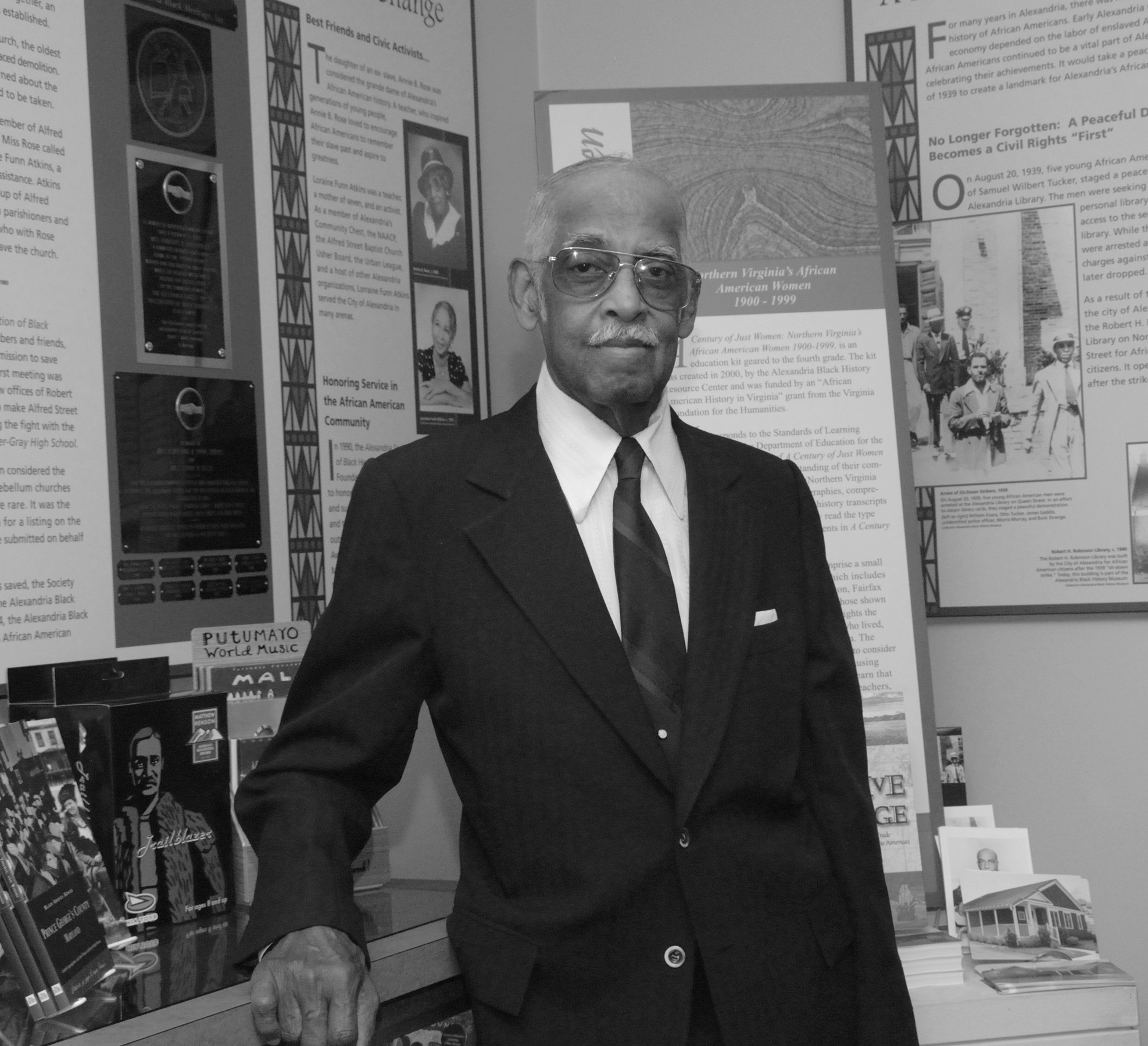 Carlton A. Funn, Sr. is a philosopher of a type, also a retired history teacher who was born in 1932. He still carries the same tattered history text, Virginia: History, Government, Geography, he used as a 7th grade student. In 1947 Lyles Crouch Elementary School was a segregated school, and Funn found the Crow-like passage off-putting. “Life among the Negroes of Virginia in slavery times was generally happy,” the slavery chapter read.

An Alexandrian, Funn was born at 1005 Oronoco St. Childhood neighbor Jesse Jennings explains the blacks’ educational dilemma: “What used to disturb me so about the textbooks was the fact that they left out so much black history. The comments that referenced blacks were inaccurate watered down comments. Those who made these comments tended to protect the white image. They were in denial of discrimination.”

The textbook continues: “The Negroes went about in a cheerful manner making a living for themselves and for those for whom they worked. They were not so unhappy as some Northerners thought they were, nor were they so happy as some Southerners claimed. The Negroes had their problems and their troubles. But they were not worried by the furious arguments going on between Northerners and Southerners over what should be done with them. In fact, they paid little attention to these arguments.”

A graduate of Storer College, a historically black college located in Harper’s Ferry, West Virginia, Funn recalled John Brown’s 1859 raid on a Harper’s Ferry arsenal. Unlike many southerners, he championed John Brown over Colonel Robert E. Lee. Lee was dispatched by the military to quell Brown’s rebellion there. “John Brown was rebelling against slavery,” Funn smiled.

“Minorities are those persons not in the mainstream,” Funn explained, “and, yes, they could be white. But my first issue was not being able to walk into the Queen Street Library.” Funn’s civic work began when, in 1957, he was asked to teach from the same history textbook he had studied as a youth. Funn holds a Master’s degree in education.

Teaching obviously is Funn’s passion. This year the Alexandria Historical Society honored him for “his lifetime of service preserving and promoting African-American heritage through National/International Cultural Exhibits which he founded. NICE is a traveling exhibition that has been shown more than 500 times to school and community groups in 12 states over the past 50 years.” The purpose is to promote awareness, human dignity and cultural understanding. His retrospective requires 287 tables to mount and includes 28 cultural groups. The exhibit changed from black-only approximately ten years ago.

“What I am I am because of my mother’s civic involvement, her inspiration, and my sweet wife’s financial sacrifice,” Funn mused. “My mother meant so much to me coming up. She didn’t tell me until years later that it was she who worked to save Alfred Street Baptist Church.” The Alexandria Society for the Preservation of Black Heritage was established as a result of the Church effort.

REGARDING TEACHING Funn said: “don’t go into teaching because you like teaching, go into it because you love teaching. It starts with the teacher and student encouraging each other to keep going. There is better balance in the textbooks, and the photos of black people are not as ugly.”

“You’d be surprised how many children now raise themselves,” Funn continued. “I always had extra clothes and shoes in my classroom. But teachers are not as revered as they once were – especially salary, I augmented my salary – and my wife and I have agreed we couldn’t teach today. In the 60s parents could correct children, help someone, now people want to sue you.”

Funn retired from teaching in 2000 and he based his success on the five As: attendance, attitude, attention, atmosphere and achievement. If I have a lasting history lesson it is: “everybody has a place, everybody has something, a niche.” As for passion, “I love my sweet wife and otherwise encourage people to go to the library, read, talk to someone and find out what you want to do. Find your passion and your life’s work will find you.”

Funn’s teaching skills are widely respected. “Individuals like you, with passions for digging deeper into our rich American heritage, are the ones who continue to preserve the history of this country for generations to enjoy,” stated Congressman Jim Moran in the 1998 Congressional Record. “Your work has inspired and taught young children and adults everywhere the value of contributions made by African-Americans and other minorities.” He also received the 1998 Excellence in Teaching Award from the National Council of Negro Women, Inc.

“Carlton Funn and Mount Vernon have a great deal in common, in that we have been sharing American history with thousands of people for decades.” Mount Vernon’s Executive Director Jim Rees said. “And at a time when history is being diminished in the classroom, Carlton’s hard work and dedication is more important than ever. We feel fortunate that the Governor appointed a true-history lover to our board of visitors, and that his knowledge of African American history in the Alexandria area is so deep and respected.”

“Carlton Funn’s great legacy to the city is his absolute exuberance – excitement – in sharing the history of African Americans with others,” said Hopkins House President Glenn Hopkins. “He is an incredible historian and an incredible guy.”

“I guess to be a legend means to be around before your time,” Funn replied. “If I have one my legacy is the fact that we have come a long ways, and have a long ways to go. I want us to respect people of all races and give them the credit that they are due.”